SEOUL, Jan. 19 (Yonhap) -- A former aide to President Park Geun-hye testified at her impeachment trial Thursday that his appointment to the presidential office was initiated by his nephew, who worked closely with the chief executive's friend at the center of an influence-peddling scandal.

Kim is an uncle of Cha Eun-taek, a music video director who has been indicted and jailed on charges of abusing his ties to Choi to gain undue favors.

Park was impeached last month for allegedly colluding with Choi and accused of abusing her power and extortion.

In response to a question from a parliamentary impeachment panel, which serves as the prosecution, Kim said he was asked by his nephew in September 2014 whether he had an interest in a presidential position.

Cha said he would recommend Kim as one of several candidates but did not guarantee his appointment or mention Choi, Kim claimed.

The former aide later served at the presidential office from late 2014 to 2016.

Thursday's hearing is the seventh in Park's impeachment trial. The court has until early June to decide whether to uphold or reject the impeachment. 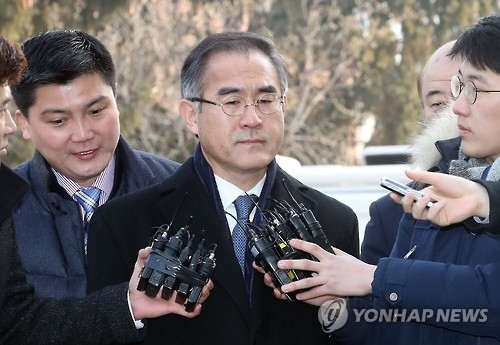