SEOUL, Jan. 19 (Yonhap) -- North Korean leader Kim Jong-un's rare move to bow to workers seems to be only a calculated part of his governing style and not a sign he cares about ordinary North Koreans, a South Korean official said Thursday.

The North's leader bowed his head to workers when he visited a shoe factory in the eastern coastal city of Wonsan in December, according to footage released by the North's state TV broadcaster on Tuesday.

It is rare for Kim, regarded as the supreme leader in North Korea, to show modesty by bowing to ordinary people.

Seoul's unification ministry speculated that the move is part of an effort to revamp his image, although it is difficult to gauge the real intentions.

"It would be hard to say that a change in (his governing) style reflects Kim's expression of love for ordinary people," said a ministry official, asking not to be named. 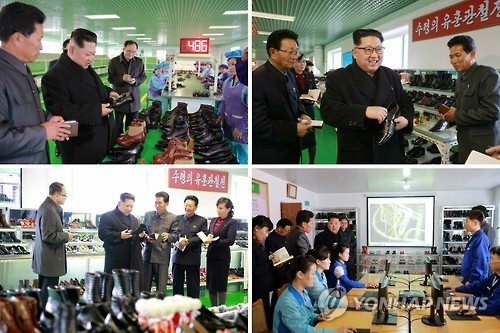 The official said that Kim's attempt to overhaul the way he is perceived may be attributable to a failure to produce big accomplishments under the so-called 200-day campaign of hard work last year.

The North's leader originally set the deadline for building a new developed district in Pyongyang, named "Ryomyong Street, at the end of 2016.

"Many North Koreans are aware that the construction has yet to be completed. International sanctions are also putting severe strains on the country," the official said. "Kim may have felt burdened because of these (issues)."

In his New Year's address, Kim expressed rare regret over his inability to perform better, which analysts say is an attempt to paint himself as a caring leader.