Seoul, the winners of the 2016 K League Classic, said they've signed Ha to a three-year contract. The 31-year-old returns to his old club for the first time in three years.

Ha made his pro debut with Ulsan Hyundai in 2004 before moving to Daegu FC two years later. After playing one season for Jeonbuk Hyundai Motors, Ha joined Seoul in 2010 and helped the club win two domestic league titles and finish second at the 2013 Asian Football Confederation (AFC) Champions League.

Ha left South Korea in 2014 for the Chinese side Beijing Guoan. Last year, he played for the Japanese clubs FC Tokyo and Nagoya Grampus.

"It brings me back memories of when I first came to Seoul," Ha said through the club. "I will go back to my first mindset for Seoul and will again prove my ability here."

During his 10 seasons in the K League, Ha scored 31 goals and bagged 20 assists in 225 matches. Nicknamed "Havi" for his resemblance to former FC Barcelona midfielder Xavi Hernandez, Ha was known for his passing and ball control skills. The four-time K League champ was also one of the three finalists for the 2013 AFC Player of the Year award.

Ha has played 13 matches for South Korea and was on the team for the 2014 FIFA World Cup.

"We now have a powerful engine in the midfield," Seoul said in a release. "We believe Ha's experience will help us win the 2017 AFC Champions League."

Seoul have been placed in Group F at the premier Asian club competition this year, along with Urawa Red Diamonds of Japan, Western Sydney Wanderers of Australia and a playoff-winning team to be determined next month.

Meanwhile, Seoul said they've started negotiations with FC Tokyo over the transfer of Yojiro Takahagi, the Japanese midfielder who has been with Seoul since 2015. 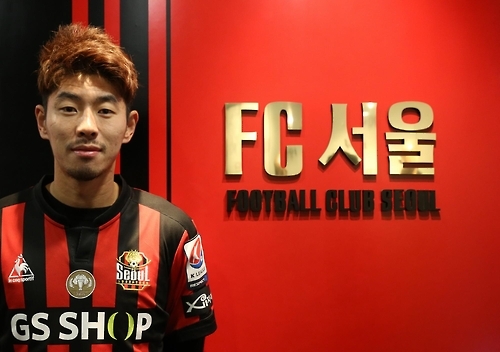