According to the Paektu Cultural Exchange (PCE), eight professional international skaters were confirmed, as of Sunday, for the 25th Paektusan International Figure Skating Festival set for Feb. 15-17 to celebrate the late Kim's Feb. 16 birthday, called "Day of the Shining Star" in the North, the Washington-based Radio Free Asia said.

The Olympic gold medalist has also won the World, European and Grand Prix Final figure skating championships, the PCE said. It, however, did not disclose the name of the athlete.

"Interested figure skaters can contact the Paektu Cultural Exchange (PCE) for more information on competing and attending this unique event," the PCE said, while saying it is an official partner of the North's Sport Ministry for the event.

The North's skating association pledged to provide airfare, room and board, and visas to all of skaters and their coaches who will take part in the annual event. 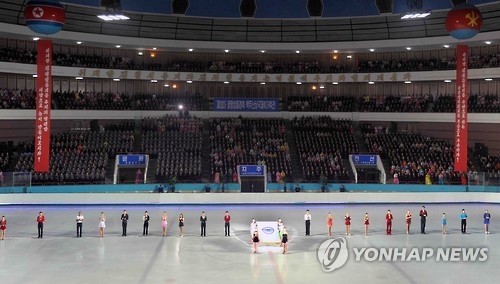 "This event aims to allow people to gain knowledge and understanding (of North Korea) ... and hopefully foster friendships through friendly competition while taking part in this exciting event," PCE Director Michael Spavor said.

Spavor also organized several sports events for North Korea, including a basketball game between the North Korean national team and a U.S. team, led by NBA Hall of Famer Dennis Rodman, in Pyongyang in January 2014 and the 2016 Pyongyang International Friendship Hockey Exhibition.

Group and private tour packages to attend the event are available, with proceeds from them to be used to support businesses for intellectually disabled athletes in the North, the PCE said.
(END)