SEOUL, Jan. 19 (Yonhap) -- South Korean tennis player Chung Hyeon bowed out of the second round at the Australian Open on Thursday.

Chung was making his second career appearance in the second round of a Grand Slam tournament, after the 2015 U.S. Open. The 20-year-old is the highest-ranked Korean tennis player.

Chung had a solid start against the former world No. 8 from Bulgaria. The Korean dropped the first game but then claimed the next six games in a row to take the first set in a hurry. 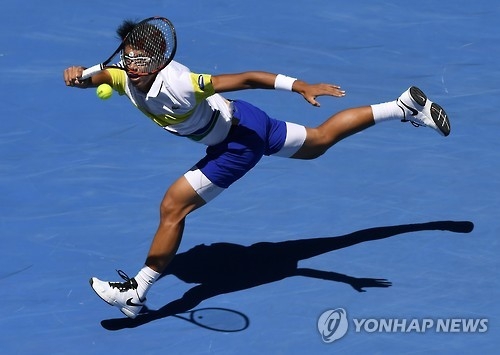 Dimitrov wouldn't go away so easily and earned a hard-fought 6-4 win in the second set to even the match.

Chung won the first two games of the third set, but Dimitrov soon made it 3-3. He then broke Chung en route to taking the set 6-4.

Tied at 2-2 in the fourth set, Dimitrov again broke Chung and held his serve to build a 4-2 lead.

Chung fought back to draw even at 4-4. Then serving with a 30-0 lead, Chung committed a series of forehand miscues to let Dimitrov take a 5-4 advantage.

Serving for the match at 30-30, Dimitrov got the final two points to move to the third round.

Chung said afterward he "learned a great deal" from the loss.

"I gave myself a chance after the first set, but couldn't keep up the momentum early in the second set," he said. "It was disappointing overall, but I have no regrets."

Dimitrov gave his young opponent credit for giving him everything he could handle.

"That first set, he definitely played lights-out," Dimitrov said. "I had to be respectful of that, and I was. But as soon as the second set started, I felt confident. And that's nice to feel."