According to the officials, they plan to import a combined 400 tons of powdered eggs from China and the United States in February. The companies include food conglomerate SPC Group which operates bakery brand Paris Baguette, Lotte Confectionery Co., Haitai Confectionery Co. and CJ Group.

So far, the local companies have used local fresh eggs for their bread, cookies, and other snacks, and refrained from using powered eggs because of the taste, the officials said.

Powdered eggs are whole eggs that have been completely dehydrated.

The outbreak of bird flu and the subsequent massive culling of poultry have sent fresh egg prices skyrocketing due to limited supply.

"We baked bread mostly with local fresh eggs for the product's freshness, taste and quality. However, we are at the stage of reviewing importing powered eggs from the U.S. due to the supply shortage," said an official at Tous Les Jours, run by CJ Foodville, the restaurant arm of food conglomerate CJ. CJ Foodville runs some 150 Tous Les Jours stores across the country.

The company said it plans to use local eggs for cakes and the imported powdered eggs for other breads.

Paris Baguette, meanwhile, said it will only use the powdered eggs for cookies not for other breads.

The company already temporarily stopped production of 19 bread items, such as muffins and roll cakes, because of the short supply of eggs.

South Korea has destroyed more than 30 million chickens and ducks at nearly 400 farms across the nation since the first case of bird flu was reported in mid-November at a chicken farm on the southwest coast. The outbreak has sent egg prices soaring with chicken prices also tipped to soar down the road.

The government has since removed tariffs on imported fresh eggs and egg products and supported 50 percent of the shipping costs for egg imports to help stabilize soaring egg prices. 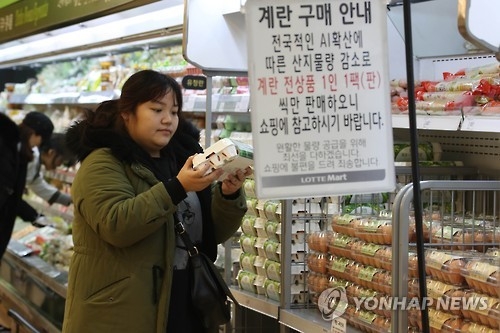