Ban paid a courtesy call to Lee Myung-bak, the country's only living former president with some -- albeit feeble -- influence in the country's politics, sparking speculation that he would soon engage in a full-fledged political campaign to boost his presidential prospects. 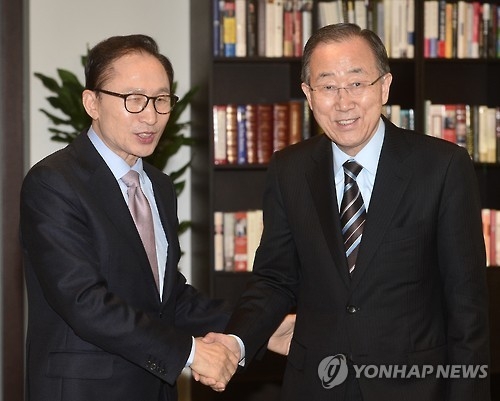 The meeting followed Ban's four-day tour across the country to connect with citizens under his likely campaign credo of "grand national integration."

The former foreign minister has yet to officially declare his presidential bid, but he has repeatedly signaled his political ambitions, vowing to work for a "change in politics" -- an apparent swipe at establishment politicians.

Ban's rendezvous with Lee drew keen political attention as some of Lee's former aides joined his preliminary campaign team. Among them is Kwak Seung-jun who served as the chairman of the Presidential Council for Future and Vision during Lee's 2008-2013 presidency.

Lee Dong-kwan and Rep. Chung Jin-suk, who served as Lee's chief press and political secretaries, respectively, are also said to be supportive of Ban.

Also on Thursday, Ban visited Son Myung-soon, the wife of late former President Kim Young-sam who ran the country from 1993-98 with a strong following in the country's southeastern region.

On Thursday morning, Ban visited the Korea Advanced Institute of Science and Technology in Daejeon, 164 kilometers south of Seoul, to deliver a lecture on science and technology policy. There, he emphasized the need to raise the level of the top science policymaker to a deputy prime minister, and for the country to pay more policy attention to the science sector. 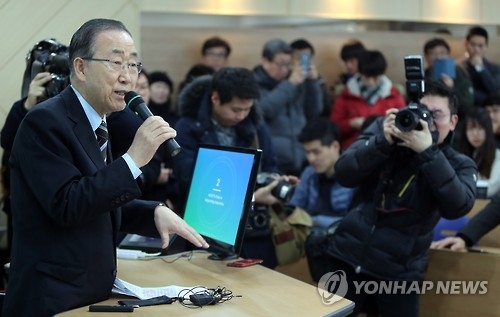 Before his visit to the school, he visited the Daejeon National Cemetery to pay respects to former President Choi Kyu-hah and the fallen troops, including the 46 sailors who were killed in North Korea's torpedo attack in 2010.

Meanwhile, the nationwide tour appeared to have had little impact on Ban's support ratings contrary to widespread expectations that his public activities would help narrow the gap with rival Moon Jae-in, a former leader of the main opposition Democratic Party.