SEJONG, Jan. 20 (Yonhap) -- Rice is gradually disappearing from Koreans' main menu due to their changing tastes, but it is rapidly evolving into a favorite among side dish marketers these days.

For thousands of years, rice has been the only staple food for the Korean people. As they eat three rice-based meals a day, a big bowl filled with white steamed rice was a symbol of an affluent and wealthy life throughout Korean history.

But its presence has been diminishing in recent years as the country basks in the abundance of numerous other foods at an unprecedented level and South Koreans' taste becomes increasingly westernized, with rice production exceeding demand. Instead, a growing number of people tend to eat fast food such as sandwiches and hamburgers amid rapid changes in diet and eating habits.

Also, recent news reports that carbohydrates in rice can lead to weight gain contributed to a drop in rice consumption. 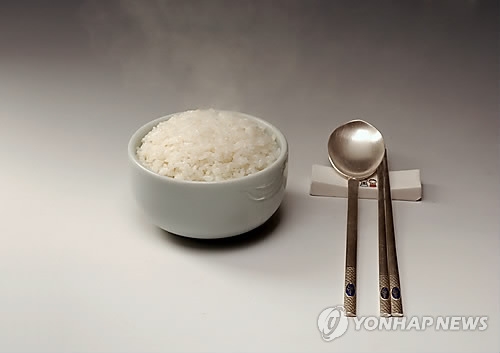 South Koreans consumed 172.4g of rice per day in 2015, compared to 216g recorded in 2006, indicating that they eat less than two bowls of rice every day. A bowl of rice weighs an average of 100g. The government has 1.71 million tons of rice in its stockpile, more than twice the amount the government storages are designed to hold.

However, rice is now changing its character to an ingredient for desserts and light meals to meet growing demand from young people for easy-to-eat and sweet, but healthy food.

Sponsored by the Ministry of Agriculture, Food and Rural Affairs, a cafeteria called "Rice Lab" opened in December last year to showcase rice-based desserts and cookies in the Hongdae neighborhood, which is known for urban arts and indie music culture in western Seoul. 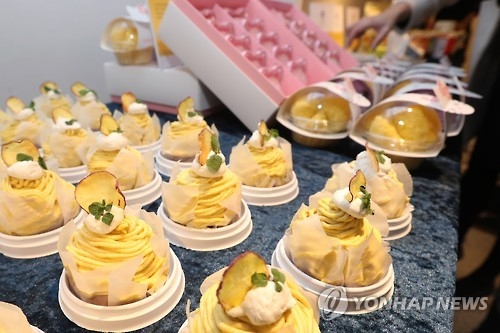 Confections such as cakes, tarts, cookies, ice creams, puddings and sweets here seem to be no different from other desserts sold in fancy bakeries and cafes.

They were all made from rice as part of the Miracle Project, a government-led campaign and competition launched in 2011 to boost rice consumption and expand dessert repertoires in new ways using the cereal grain.

"It is aimed at highlighting the new value of rice as an ingredient and encouraging local food companies to roll out consumer-tailored rice dishes," said the ministry. 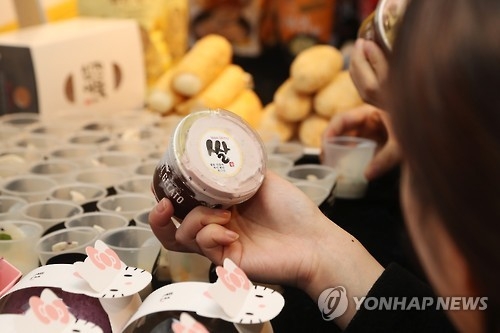 Major food and confectionery companies including SPC Samlip Co., a leading confectionery chain, and Pulmuone Co. also joined the competition as corporate mentors, giving advice to award winners and redesigning the recipes to commercialize them.

In 2015, Sulbing, one of the most popular Korean-style dessert cafes, picked a rice-crust bingsoo -- a Korean shaved ice dessert with toppings of brown rice crust and creams -- and sold nearly 800,000 dishes from August to December.

Last year's first-prize winner was blueberry rice cake and chocolate, decorated with snowy rice powder and berries on top, which was later sold at Bizeun, a rice-teria run by SPC Samlip. 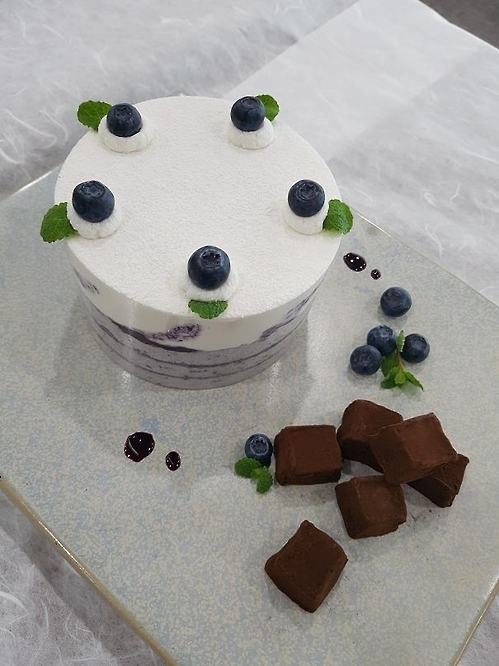 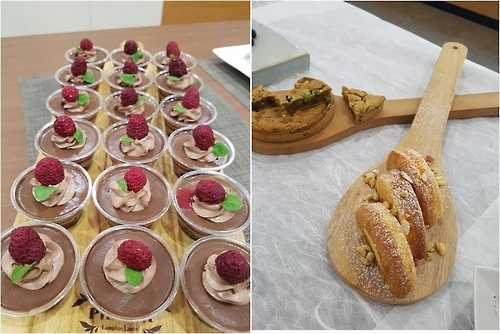 "The blueberry cake is very soft and spongy. I didn't feel any ricey smells or texture. The chocolate was perfect," said Yoon Jung-hee, a customer. "I would recommend the vegan chocolate cake to those who are on a diet. It says it didn't use any animal fat and protein like butter and egg."

Experts say rice-made desserts are more nutritiously balanced as rice has carbohydrates along with protein and vitamins, and are chewier than flour-based cakes and biscuits.

"In terms of nutrition, using rice is more valuable than using only flour and its chewy texture is attractive," said Bae Ki-sung, a professor at SPC Research Institute of Food and Biotechnology. "Our company is trying to add rice to bread and cakes to a certain extent in order to make use of these advantages."

But there is a long way to go to fully replace flour with rice because rice loses moisture too fast.

"When you buy a rice cake, it becomes hard and stiff just a few hours later. This point keeps us from using rice as a main ingredient for commercialized desserts," said Bae. "Our research focuses on overcoming this moisture-losing character of rice and expanding more rice-based desserts and bites."