SEOUL, Jan. 19 (Yonhap) -- President Park Geun-hye has a mobile phone under a borrowed name, a former aide said during her impeachment trial Thursday, revealing an act that is punishable by law.

Jeong Ho-seong, a former presidential secretary, made the revelation while testifying at the Constitutional Court about an influence-peddling scandal centered on Park and her friend Choi Soon-sil. 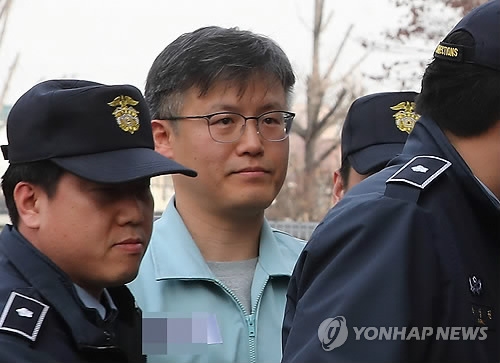 According to Jeong, Park used such a phone even as a lawmaker prior to becoming president out of concerns about wiretapping and security in general. The former aide began serving Park in the late 90s. He is known as a member of the "doorknob trio" who had direct access to the president.

"It's a rather painful side of our politics, but there has long been controversy about wiretapping," he said in response to a question from a parliamentary impeachment panel, which serves as the prosecution in the trial. "We didn't use (phones) registered under our names because of the risk of our conversations being tapped."

South Korea bans the use of phones under borrowed names to commit illegal acts and violations of that law can be punished with up to three years in prison or up to 100 million won (US$85,000) in fines.

Asked whether Park was aware that her phone was registered under a borrowed name, Jeong said she probably used whatever phone was given to her.

He denied that Choi ordered the use of such phones.

Choi is accused of abusing her ties to the president to extort money from conglomerates and control state affairs behind the scenes. Park was impeached last month for allegedly colluding with Choi to get money from businesses.

Jeong himself has been indicted and jailed on charges of leaking classified documents to Choi under orders from. He has admitted to the charge, claiming he only intended to assist the president.

The former aide said he used a borrowed-name phone to contact Choi and exchanged two to three phone calls or text messages a day between January 2013 and December 2014.

Park is immune from prosecution while in office.

The court has until early June to decide whether to uphold or reject her impeachment.