SEOUL, Jan. 20 (Yonhap) -- India will soon submit a report on its implementation of U.N. sanctions imposed on North Korea, which include the suspension of an Indian space technology training program for North Koreans, New Delhi's top envoy to Seoul said.

"In our case, our implementation report takes a lot of time to put together. ... It's a fairly lengthy process. But we take things seriously," Indian Ambassador to South Korea Vikram Doraiswami said in an interview with Yonhap News Agency at his embassy in central Seoul on Wednesday.

"I am told this is due very soon. Although the entire process has been completed, we already conveyed this informally to (South) Korean partners that we are in the process of having it inked to submit," the ambassador said of India's somewhat belated presentation of an implementation report over United Nations Security Council Resolution 2270 that was slapped on Pyongyang last year.

Starting in May last year, a total of 66 countries have submitted their reports on compliance with the sanctions resolution adopted in March in response to North Korea's underground nuclear test in January 2016. Pyongyang later conducted another nuclear test in September, resulting in the adoption of the latest UNSC Resolution 2321.

"In our case, the process takes time, but it is to ensure that there's no loopholes in there," he noted.

Despite India's clear condemnation of North Korea's nuclear weapons ambitions and related activities, the two countries are maintaining relatively solid diplomatic and trade relations with their annual trade reportedly amounting to some US$100 million.

Doraiswami said the dealings India does with North Korea are hardly subject to the U.N. resolution.

"We don't really apprehend that we are doing anything that would have been substantially changed by what these resolutions did ... so most of them don't really affect our trade directly but indirectly in the form of narrowing the margin for financial transactions," he noted.

In a follow-up with the U.N. sanctions, India suspended its training programs for North Koreans last year, the ambassador stressed, referring particularly to the shutdown of an Indian training program in space research, which had been hosting North Korean researchers.

Two North Koreans were studying at the Center for Space Science and Technology Education in Asia and the Pacific in India's Dehradun as of mid-2016, possibly in violation of U.N. sanctions that prohibit members from providing technical training to North Korea, according to a news report.

"We already notified that (suspension) to the U.N. separately last year. We took action on the basis of this being drawn to our attention that some North Koreans from potentially sensitive agencies (could) come to training, even though the program was a U.N. approved program," the envoy said.

Drawing on decades of inter-Korean hostility, the ambassador said the problem should be solved through dialogue, indicating that India could play a role in bringing the two Koreas together for talks.

Still, India has "legitimate security concerns from some of North Korea's activities and for us to abandon North Korea entirely would be an extremely pointless step that would also hurt us," Doraiswami said.

On the trade relations front with South Korea, India seeks to renew its expiring Comprehensive Economic Partnership Agreement, a form of free trade agreement, by the end of this year, the ambassador noted.

In the renewed agreement, India wants South Korea to open up its market for skilled Indian services like IT and engineering, the diplomat said.

Currently, the two countries are also in discussion to reach an agreement on South Korea's exports of defense hardware, including ships to India, a country with one of the world's biggest standing armies, the ambassador said. The deal will be announced in a few weeks, he said.

A separate discussion is also being led between Seoul and New Delhi over the latter's offer to provide satellite service technology, he added.

He underlined the South Korea-India relationship has gone up to its best phase under the current Modi government in India, with six Indian ministers having visited South Korea recently, including Prime Minister Narendra Modi.

At present, the countries are discussing the Indian finance minister's visit to Seoul, he said, adding "that means almost all of our important ministers would've come to Korea. We've never had this level of political interest shown in Korea since the Korean War (1950-53)."

Referring to the local Indian Republic Day celebrations set to take place on Jan. 26 in the provincial city of Daegu, the ambassador said, "Our objective in the last couple of years has been to expand partnership in multiple directions based on the prime minister's clear vision that Korea is an important and special strategic partner.

"So we want to now put as much content into partnerships as possible. This includes not just trade and economic relations ... but also being able to reach out to people, businesses, universities, cultural institutions and even officials outside of the big metropolitan city of Seoul." 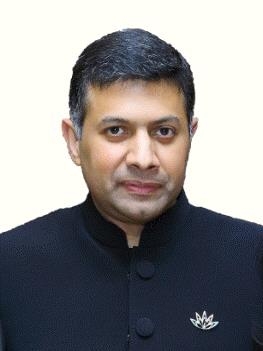