The snow warning issued by the weather authority is expected to expand to the southern part of the country as well.

Due to the below-zero temperature, the heavy snow fall led to traffic and transportation problems in the Seoul metropolitan area. At 5:22 a.m., four vehicles piled up on Seohaean Expressway, killing one. Also, earlier in the morning, a train on the Seoul subway experienced a problem, forcing 300 passengers to transfer to a new train.

In addition with the high sea waves alert being issued along the western coast, all ships connecting to major islands near Incheon are now suspended.

"It will continue to snow throughout the country, with things expected to clear during the daytime," an official from the weather agency said. It warned that cold temperatures will likely cause the snow to freeze requiring people to be careful when driving. 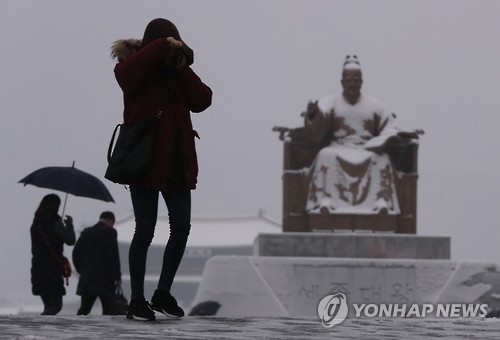