SEOUL, Jan. 20 (Yonhap) -- Rep. Yoo Seong-min, a potential presidential contender from the conservative Bareun Party, said South Korea should adopt a law to maintain the present the service period for conscripts on Friday, as liberal rivals are calling to reduce it to win votes.

As South Korea is still technically at war with the North, all able-bodied men between the ages of 18 and 35 must serve in the military for about two years under the existing system.

Yoo's remark came as Moon Jae-in, former head of the Democratic Party and the front-runner among potential presidential candidates, hinted at cutting the tour of duty period to one year.

"I would like to propose that presidential candidates stop making pledges to reduce the service period every election," Yoo said.

"If the service period is reduced by three or six months in every presidential race, we will soon be unable to maintain a proper military," the lawmaker claimed. "The candidates, especially those from the Democratic Party, should refrain (from making such vows)."

Yoo said that in 2012 Moon made a similar pledge and added he was surprised to find that President Park Geun-hye also vowed to reduce the period to 18 months.

As most young South Korean men are obligated to serve in the military, potential candidates have been making various proposals on the conscription system.

Gyeonggi Gov. Nam Kyung-pil from Bareun claimed South Korea should shift to a volunteer military system from the current conscription, in line with falling birthrates. 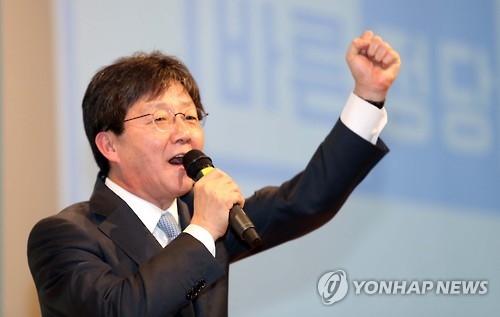