SEJONG, Jan. 20 (Yonhap) -- South Korea will beef up its government-level response to China's retaliatory trade actions against its products and businesses in apparent retaliation for welcoming a U.S.-owned missile system, the government said Friday.

At an economic meeting in Seoul chaired by Vice Finance Minister Choi Sang-mok, the government decided to set up subcommittees on industrial sectors, such as batteries, that are known to be targets of China's trade reprisals under the government-led task force team on Chinese nontariff trade barriers, according to the Ministry of Strategy and Finance.

The subcommittees will strengthen monitoring of the issue sector by sector and increase communication with concerned businesses.

It is part of South Korea's measures towards Beijing, which has implemented anti-Korean moves against South Korean businesses in retaliation for Seoul's plan to deploy the Terminal High Altitude Area Defense (THAAD) on its soil.

The South Korean government earlier said it would take a firm stance against the Chinese movements and continue to object to the Chinese hostile measures.

They agreed on a free trade pact, which took effect in December 2015, with tariffs on about 90 percent of goods to be eventually removed over the next two decades. 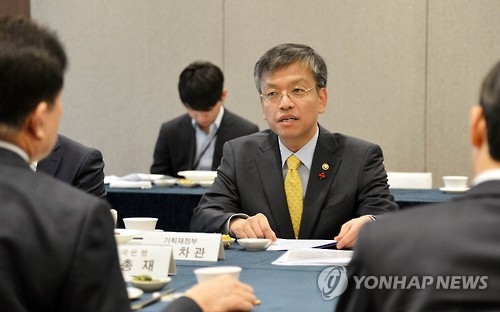 S. Korea to set up response teams to deal with China's retaliatory measures

S. Korea to set up response teams to deal with China's retaliatory measures