"Thanks to all of you, 2016 was a time of improvement for us in many aspects," the members said Thursday where they participated in a series of photo ops, greeted fans and talked about their feelings for receiving awards at the 26th Seoul Music Awards ceremony held at Jamsil Indoor Gymnasium in southern Seoul.

The prestigious event recognizes and honors some of the hottest K-pop stars who have made outstanding achievements throughout the year. The winners are chosen from a scoring system that weights mobile votes 20 percent, a popularity poll hosted by the organizers 10 percent, digital downloads and album sales 40 percent, and judges' scores 30 percent.

"Blood, Sweat & Tears" is the lead single off the group's second LP "Wings," which sold 751,000 copies, becoming the highest selling album last year in South Korea. The album also reached as high as 26th on the main Billboard 200 in the United States and 62nd on the United Kingdom's Official Albums Chart Top 100, marking the highest overseas feat achieved by a Korean musician to date. 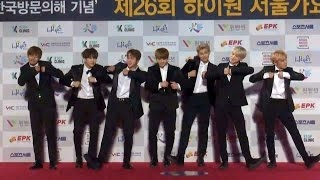