"Of course we want to win it (the grand prize), but we won't get our hopes up too high and instead focus on putting on a good show and enjoying the event," the group's leader Suho said Thursday when asked whether the group yearns for this year's grand prize at the 26th Seoul Music Awards ceremony held in the Jamsil Indoor Gymnasium in southern Seoul.

The group was crowned its first top prize at the ceremony in 2014 and had continued its prestige for four consecutive years including 2017, making an unprecedented record in the history of the event.

The prestigious event recognizes and honors some of the hottest K-pop stars who have made outstanding achievements throughout the year. The winners are determined 20 percent by mobile votes, 10 percent by a popularity vote hosted by the organizers, 40 percent by digital downloads and album sales, and 30 percent by judges' scores. 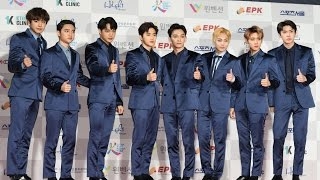