Since his return to Korea last Thursday after 10 years of service as the U.N. secretary-general, Ban has been striving to connect with citizens -- and apparently explore ways to boost his presidential prospects.

Ban has yet to declare his presidential bid, but he has repeatedly signaled his intention to run in the presidential election this year, vowing to work for a "change in politics" in a message directed at establishment politicians.

Chung welcomed Ban's return to South Korea, expressing his hope that Ban will use his experience at the world body to help address a series of challenges facing his home country.

"You have done hard work over the past decade as U.N. chief. We truly welcome you back home," Chung told Ban. 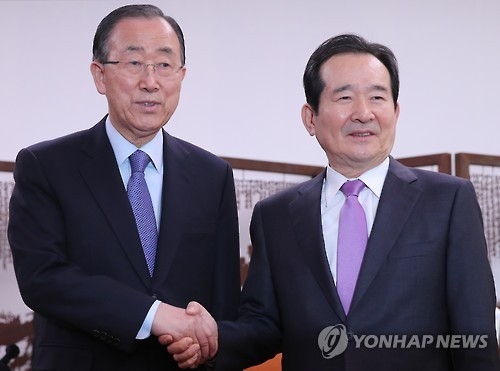 Ban, in turn, stressed the importance of the legislature's role in stabilizing state affairs amid President Park Geun-hye's impeachment. Park was suspended on Dec. 9 after parliament impeached her over a corruption scandal.

"I have met with citizens who were very concerned about the economy and various political situations," Ban said, recounting reactions from citizens that he met during his tour.

In response to a question by vice speaker Park about whether he has decided to join any political party, Ban said, "Nothing has been decided as of yet."

On Monday, Ban indicated that he would make a decision on his political affiliation after the Lunar New Year's holiday that begins next Friday.

Ban also held a closed-door meeting with Acting President and Prime Minister Hwang Kyo-ahn on Friday after visiting him to receive the Order of Mugunghwa, a national merit award named after the Rose of Sharon, South Korea's national flower.

The South Korean government decided to grant him the award for his contribution to enhancing national stature after serving two terms at the United Nations. Officials said the two held a meeting for 15 minutes, but only exchanged well-wishing remarks that held no political significance.