INCHEON, Jan. 20 (Yonhap) -- Time is of the essence in dealing with geopolitical and security challenges facing the Northeast Asian region, the outgoing top U.S. envoy to South Korea said Friday, adding that the current situation warrants more efforts by Washington and Seoul to strengthen their alliance.

Ambassador Mark Lippert noted that he remains optimistic about the future of the two allies, citing a strong foundation and mechanisms that will help them iron out any differences of opinions taking place under any administration.

He made the remarks during a press meeting held before boarding a plane for the United States at Incheon International Airport, west of Seoul. Appointed by President Barack Obama as his top envoy in Seoul in October 2014, he was returning home in time for Donald Trump's inauguration slated for Friday (local time).

"Time is of the essence. This is a region where geopolitical, security and economic challenges are real and significant. The relationship and the alliance need to get stronger and stronger over time, and that would be my advice to anyone who manages this alliance between the two countries," he added. 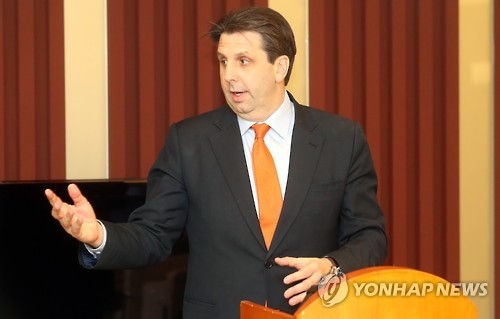 Lippert reaffirmed that the U.S. and South Korea are maintaining very strong ties.

"The alliance at this point of time is in the best shape it has been in history, and that gives you a very strong foundation. The alliance now has strong institutional mechanisms to drive dynamic change and to keep the alliance adaptable but also to manage differences of opinions," he said.

"There is also almost endless opportunity for our future cooperation in more traditional areas like security or the economy but new areas -- energy environment, cyberspace. So the cooperative opportunities are there for the taking ... and that gives me a reason for optimism," he added.

Asked what will be the most memorable things during his stay here, he cited having two kids here and giving them Korean names. He also cherished "little things" that he could experience, including Korean food and people in traditional markets.

Lippert has been credited with his efforts to actively engage with the South Korean people, which helped him earn the recognition of being one of the most beloved American ambassadors ever. His tenure here has also been marked by the surprise knife attack in 2015 during an early morning public gathering in Seoul.

In response to a question about what advice he would give to his successor, he underlined the importance of getting close to Korean people to better understand their life besides carrying out his or her main obligation to strengthen alliance between the two countries.

"Advice for success? I would say that I have already said, which is to use the foundation, use the mechanisms and use the opportunity and move forward, not back. That would be the first thing," he said.

Lippert said that he has been honored to serve as the U.S. envoy in Seoul for more than two years and that it is "sad" to leave the country but promised to do his best as a private citizen to help improve the relationship between the two partners.

Bidding his farewell, he also expressed appreciation for the "love" and the "attention" that he and his family have received from the Korean people and ended the press meeting by saying his signature slogan in Korean, "Let's go together."