SEOUL, Jan. 22 (Yonhap) -- South Korea has developed a new type of a container that can be folded into one fourth of its original size, greatly reducing the cost of shipping and storing empty containers, the government said Sunday.

The new foldable container, developed by the state-run Korea Railroad Research Institute, is one of the first to be developed in the world, according to the Ministry of Land, Infrastructure and Transport.

However, it is the most efficient and reliable folding container to have been developed so far, it said.

The ministry noted many countries, including the Netherlands and the United States, have been working to develop foldable containers to help cut costs, but most have been unable to do so due to problems related to the massive weight a container must withstand when stacked on top of one another.

Each column in every corner of the new container developed here is designed to support up to 96 tons of pressure. 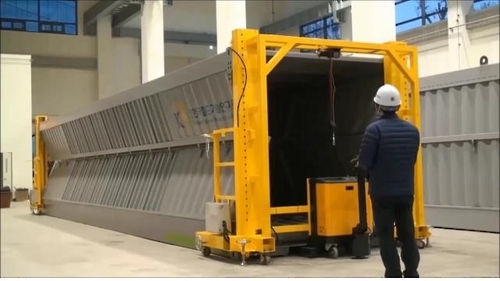 Also, it takes only about 10 minutes for two workers to fold or unfold the new container, using simple equipment, the ministry said.

Other existing folding containers, on the other hand, take up to five workers and special, heavy equipment to be folded and unfolded, it added.

Currently, South Korea spends about 396 billion won (US$338.4 million) per year to relocate or distribute empty containers to where they are needed.

If all existing containers were replaced by the new folding containers, the annual cost would be cut by nearly 75 percent to 96 billion a year, the ministry said.

Globally, the new containers will help reduce the cost to about $1.67 billion from the current $6.67 billion.