Lee Kyu-chul, spokesman for the independent counsel team, said it called in Choi Soon-sil to face questioning on Saturday morning as a bribery suspect. Choi has denied repeated summonses citing health issues, her own criminal trial and her obligation to testify at Park's impeachment trial. 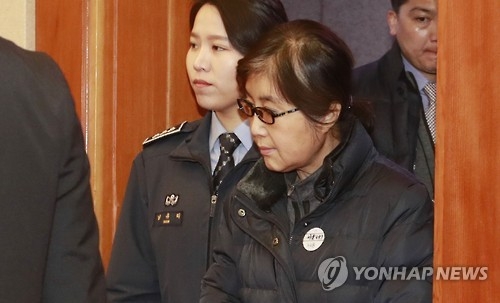 "We have not yet received notice of whether she will appear," Lee said during a regular press briefing. "If she does not appear tomorrow, I understand that we will seek an arrest warrant against her."

Prosecutors suspect that Lee Jae-yong, vice chairman of Samsung Electronics, offered or promised a total of 43 billion won (US$37 million) in "donations" to two foundations and other shady organizations controlled by Choi in return for the government's backing of a merger of two Samsung affiliates in 2015.

Earlier this week, the team sought an arrest warrant for Lee on suspicion of bribery, embezzlement and perjury, but a Seoul court rejected the request.

Choi's attorney Lee Kyung-jae made it clear she has no plans to obey the summons.

"I asked (Choi) again yesterday, but she said she can't appear before the special prosecutors," he said. "She's extremely busy with her trial and all."

Choi has been indicted on charges of abuse of power, coercion and attempted fraud. Lee claimed the prosecutors have already gathered all the information they need from her.

"If an arrest warrant is issued, we'll deal with it then. There isn't much we can do if a warrant is enforced under the law. Either way, it's the same to (Choi)," he added.

Park was impeached by parliament last month for allegedly letting her friend meddle in state affairs and colluding with her to extort money from conglomerates.