SEOUL, Jan. 20 (Yonhap) -- The leadership vacuum in South Korea in the aftermath of the impeachment of President Park Geun-hye will not affect South Korea's relations with the U.S. and China, former United Nations Secretary-General Ban Ki-moon said Friday.

"South Korea-U.S. relations and South Korea-China relations are so important that I am confident they will not be affected much by any occurrence of temporary changes in their conditions," Ban told reporters ahead of a reception with the foreign ambassadors' community in Seoul.

"President Park reaffirmed solid diplomatic relations between South Korea and the U.S. in her phone call made immediately after President-elect Donald Trump's election," Ban said, adding that "I am not very worried and think that they (any problems) can be solved through diplomacy."

Drawing on South Korea's souring diplomatic ties with Japan, he also struck a positive note, saying the countries will "move forward in a forward-looking manner while facing up the past."

Since his return home last week from his 10-year stint as the U.N. chief, Ban has attempted to increase his profile as a possible presidential candidate in his home country.

About four years into her five-year term, Park was impeached in December over alleged influence-peddling in collusion with her longtime friend and presidential officials.

She is now waiting for the Constitutional Court's decision on whether or not to oust her.

"As you may agree, I have been serving as secretary-general the last 10 years during the most turbulent, most transformative phase in the history of the U.N.," Ban said in the event where some 100 foreign ambassadors were assembled.

He cited the U.N.'s drawing up of sustainable development goals, signing of the Paris Agreement on climate change and so-called "Planet 50-50" gender equality campaign as his key legacies at the top job.

He underscored that South Korea is now "at a critical juncture," referring to a new administration in Washington as well as North Korea's missile and nuclear threats.

"There is a new administration in Washington D.C. from tomorrow. North Korea is growing more belligerent. Tensions from the past still linger in this part of the world," Ban said, insinuating current history rows between Seoul and Tokyo.

"Korea has traditionally played an important role as a bridge in Northeast Asia. For a bridge to function better, it must be strong," he said, adding that that's why South Korea needs to revitalize itself.

"At this time of uncertainty, we need to mobilize goodwill and squarely confront the many challenges ahead ... personally, I will do my best to contribute even modestly to the prosperity, peace and security in the Korea Peninsula, in the region, by using my vision and my experience," he noted.

Hosting the reception event for Ban, Foreign Minister Yun Byung-se said "Secretary-General Ban is a symbol of the special bond between Korea and the U.N." 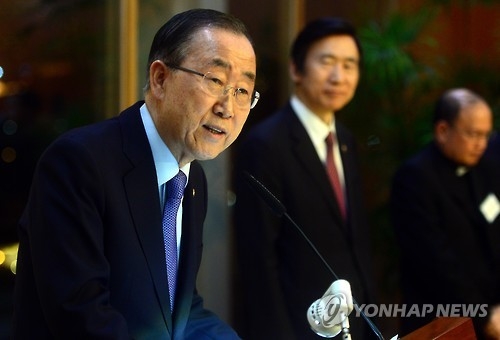