In his first speech as president, Trump repeatedly promised to put "America First" in every decision, saying that the U.S. has so far "subsidized the armies of other countries while allowing for the very sad depletion of our military" and "defended other nations' borders while refusing to defend our own." 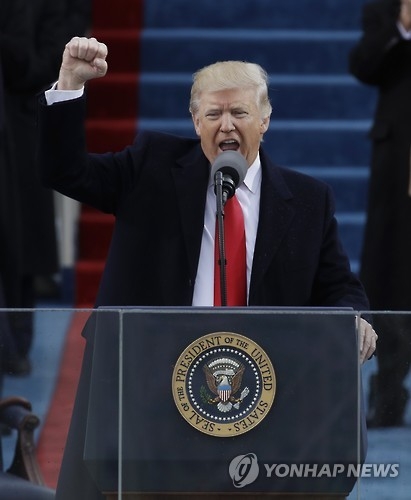 The remark is similar to his campaign rhetoric that the U.S. can no longer afford to be the policeman of the world and it makes no sense for the U.S. to help defend such wealthy allies as Japan, South Korea and Saudi Arabia in exchange for little.

During the campaign, Trump even suggested ending protection of allies unless they pay more.

Since the election, however, Trump has significantly toned down the campaign rhetoric, making no mention of alliances and filled some key posts with people valuing the alliances, such as incoming Defense Secretary James Mattis.

On Friday, Trump also pledged to "reinforce all the alliances."

Many agree that the troop presence is also in line with U.S. interests in a region marked by China's rise. U.S. officials, including new U.S. Forces Korea Commander Vincent Brooks, said it would cost more to keep those troops stationed in the U.S. than it does in Korea.

Top Trump administration officials have also voiced the need for allies to do their parts.

Incoming Secretary of State Rex Tillerson said in his confirmation hearing last week that the U.S. "cannot look the other way at allies that do not meet their obligations."

Mattis also said that while the U.S. fulfills its treaty obligations, he expects "our allies and partners to uphold their obligations as well," though he said the U.S. is stronger when it fulfills its security commitments to allies.

Alan Romberg, a distinguished fellow at the Stimson Center, said he believes Trump's remarks had little do to with defense-cost sharing with allies, but more about criticizing the previous administration of Barack Obama.

"The sentence about letting our military become weaker was basically not about ending relationships with others, especially others such as Korea who are not only crucial allies but who fund their own militaries, but about providing adequate funding for US military," Romberg said.

It was more of a reinforcement of his frequent charge that the Obama administration, and probably those before it, have allowed U.S. strength to wither away, he said.

"We'll have to see as time passes how much of a blueprint this speech is for policies and programs in the future. My guess is that he means what he says and will try to put some meat on the bones of these rather populist words. But he will also run up against some realities he hasn't yet had to confront, both domestically and in foreign policy terms," Romberg said.

Manning said that Trump's speech was "a continuation of his inward-focused, populist campaign rhetoric, simplistic, a dark vision of the present that is at odds with reality." He said many in the U.S. military could resent being described as "depleted."

"Is there a better military anywhere in the world than the US that Trump would trade it for?" he said. "What he did not say was also very telling: No mention of American leadership, values, or global challenges other than defeating terrorism."

Manning said that North Korea will be one of Trump's first national security tests.

"Trump has recklessly laid down more red-line before he took office than Obama did in 8 years -- trade tariffs, questioning the One China policy, and not least, North Korea," he said.

The expert recalled Trump's "It won't happen" tweet in response to North Korean leader Kim Jong-un's New Year's Day threat that the country is close to mastering capabilities of building a nuclear missile capable of reaching the U.S.

"I suspect Trump will soon look as foolish as Obama did after his 'red-lines' on Syrian chemical weapons," he said. "Unless Trump plans to risk a war, I doubt that he intends to pre-empt a North Korean test. Bluffing is an important skill in playing poker, maybe in negotiating real estate deals. But it tends to be disastrous for Great Powers."