In his inauguration speech, new U.S. President Donald Trump stressed his "America First" doctrine again, saying that his every decision on trade, taxes and foreign affairs will be made to benefit Americans.

"From this moment on, it's going to be America First," said Trump. "We will follow two simple rules: Buy American and hire American."

His speech is in line with the new president's past statements that have blamed free trade for many Americans' economic woes like high unemployment rates and trade deficits.

Trump has pledged to withdraw from the Trans Pacific Partnership (TPP) free trade deal signed by 12 Asia-Pacific nations and renegotiate the North American Free Trade Agreement (NAFTA). He has also denounced the FTA with South Korea as a job destroyer, hinting that he would seek to revise the terms. 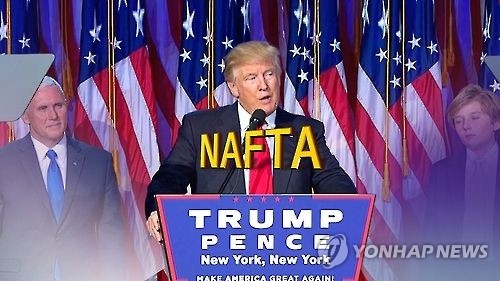 In a recent annual government-level meeting on discussing pending trade issues over the Korea-U.S. FTA, which took effect in 2012, the two sides did not mention any possibility of renegotiations.

However, experts are still worried that the Trump administration may target the Seoul-Washington FTA, citing that Asia's fourth-largest economy posted US$23.3 billion in trade surplus with the U.S. last year, accounting for 26 percent of the country's total trade surplus.

Also, the massive trade surplus may lead the U.S. government to designate South Korea as a currency manipulator after putting China on its list in coming months.

Trump has insisted that the Beijing government is wielding influence on the currency market, warning that his government will label the country as a currency manipulator and restrict Chinese imports.

"If China is labeled as a manipulator, intensifying Washington-Beijing tensions and widespreading protectionism will drag down global trade and spark dispute over foreign exchange and trade across the world," said the latest report by state-run Korea Institute for International Economic Policy (KIEP). "Such global turmoil would spread to the South Korean economy, which is a small open market."

The influence of the new U.S. president on the global financial market was seen this week as his caution against a too strong dollar sparked turmoil in the global foreign currency market, resulting in a sharp appreciation of yen, yuan and won against the U.S. dollar.

Economists noted that a weaker U.S. dollar will weigh heavily on the South Korean economy as the strengthened Korean won would undermine price competitiveness of its products in the world market. 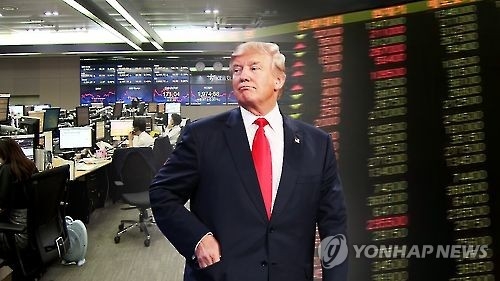 Along with the protectionist trade policies, the new U.S. government is widely believed to speed up the pace of rate hikes, faster than the Federal Reserve's earlier plan to raise the base rates three times this year.

Higher interest rates in the U.S. will bring about a rise in interest rates in South Korea and put more burden on the country's troubling household debt which reached 1,300 trillion won ($1.1 trillion) last year.

According to South Korea's central bank data, a 1 percent gain in loan rates will lead to an increase of 9 trillion won in interest on households, potentially discouraging people from spending more.

The South Korean government has been on high alert to map out a contingency plan against what Trump's unpredictable economic policies and actions would bring about.

An emergency economic policy planning task force team has been working for weeks to monitor the global and local financial markets and take appropriate actions if necessary.

The government is also making efforts to explain South Korea's economic policies and road maps to the Trump administration, including its plan to buy shale gas from the U.S. as part of ways to reduce the country's current account surplus against the world's biggest economy.

Finance Minister Yoo Il-ho also visited the U.S. last week to meet with U.S. investors including Blackstone Group CEO Stephen Schwarzman, the chairman of the Strategic and Policy Forum, an advisory group on economic policies for the Trump administration.