SEOUL, Jan. 21 (Yonhap) -- Hundreds of people took to the streets in Seoul on Saturday in protest of new U.S. President Donald Trump making discriminatory remarks against women in the runup to the election.

A group of some 500 demonstrators, made up of locals and foreigners, marched near Gangnam Station in southern Seoul, picketing and chanting together, "We want freedom, equality and respect right now!"

"We protest against the discriminatory and disrespectful remarks made by President Donald Trump during the campaign period and stand here to send a strong message to the world on his inauguration day," said a local women's rights advocacy group that organized the rally in a statement.

The event was part of a broader Women's March that is taking place in various cities across the globe on the same day.

"Trump has been making trouble with his sexist comments, and I think our politicians are no different from him," Kim Sang-ae, 23, who took part in the march said. "I came here to voice that women also have voting rights." 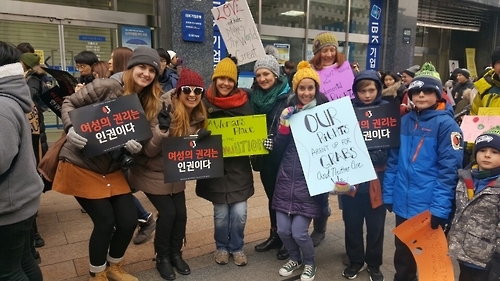 Hundreds protest in anti-Trump rally for women's rights in Seoul

Hundreds protest in anti-Trump rally for women's rights in Seoul