Braving cold weather amid snow flurries, hundreds of thousands of protesters held a candlelight vigil in central Seoul to call on Park to immediately resign and the Constitutional Court to speed up its review over the legality of Park's impeachment.

With some 2,300 civic groups in attendance, demonstrators strongly called for the arrest of the heads of local conglomerates, including Samsung Group, over bribery charges in connection to a corruption scandal involving Park and her long-time friend Choi Soon-sil. 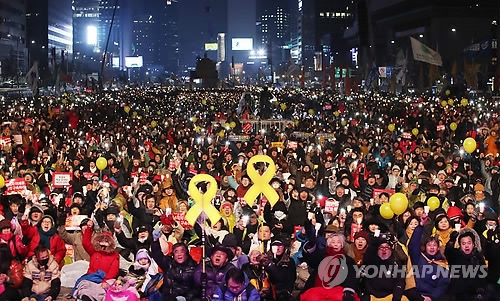 The team of special investigators suspect that Lee gave or promised to offer some 43 billion won (US$36.6 million) worth of bribes to Park's jailed friend Choi in return for business favors.

The probe team said that the kickback to Choi amounted to bribes to Park, adding that there is enough evidence to prove that the two shared profits.

There are suspicions that the president ordered a minister to press the state pension fund to back a merger of two Samsung units, a key step for the smooth management succession to Lee from his ailing father Lee Kun-hee.

"Punishment of more than a five-year jail term is handed down if one embezzles over 5 billion won. Lee must be arrested, given the huge amount of embezzlement," said Kim Sang-eun, a lawyer for an association of progressive civic groups. "How can this cut-and-dried situation not apply to Lee?"

The scandal has engulfed the nation since late November, leading parliament on Dec. 9 to vote for impeaching Park. The Constitutional Court is reviewing whether to reinstate or unseat her, and should make a decision within 180 days from the day Park was impeached.

South Korea is expected to have a presidential election this year earlier than expected if the court approves the impeachment. 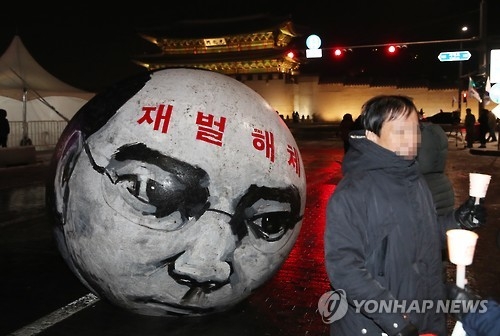 On Saturday, Culture Minister Cho Yoon-sun and Kim Ki-choon, a former presidential chief of staff, were formally arrested over their suspected roles in creating the blacklisting of cultural figures deemed critical of the conservative government.

At the rally, some protesters condemned the making of the blacklist, saying the move infringed on the people's freedom of thought and expression.

"Kim and Cho are all key aides to President Park, so the president should resign by taking all responsibility," said Kim Il-kwon, head of an independent film company.

Meanwhile, waving the national flag, conservative civic groups held a separate rally earlier in the day to express their opposition to the impeachment.

"If the Constitutional Court approves the impeachment, we will spearhead a move to stage a riot against it," said Chung Kwang-yong, a spokesman at an association of civic groups against the impeachment. 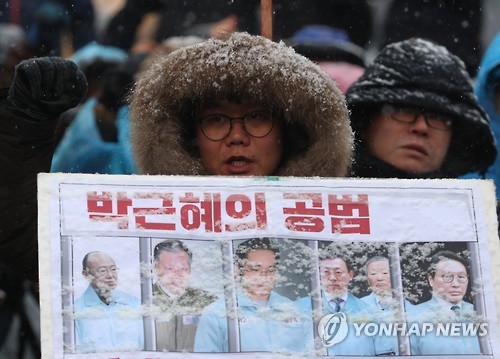