"Donald Trump of the Republican Party was inaugurated as the 45th president of the United States on Jan. 20," reported the Rodong Sinmun, a daily of the North's ruling Workers' Party. "The inauguration ceremony took place in Washington."

The newspaper, however, did not deliver a separate commentary or statements on Trump. North Korean media outlets have not been making significant statements on the new administration in Washington since Trump's victory in the election last year.

Political pundits said Pyongyang is apparently taking a wait-and-see stance until the new administration comes up with details on its polices against North Korea.

Trump took the oath of office as the 45th U.S. president in a swearing-in ceremony outside the Capitol building Friday. 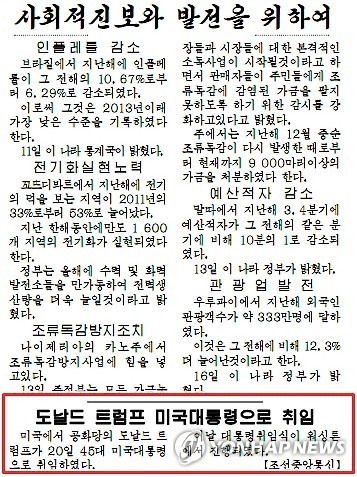