SEOUL, Jan. 22 (Yonhap) -- South Chungcheong Gov. Ahn Hee-jung on Sunday officially declared his ambition to run in the next presidential election, describing himself as the right figure to lead the next administration.

This year's presidential election may come earlier than December as the Constitutional Court is currently reviewing the legitimacy of President Park Geun-hye's impeachment motion passed last year. If approved, the country would have 60 days to pick a new leader.

Ahn, a member of the main opposition Democratic Party, said he will grab the top office for the opposition bloc.

The governor said the latest political crisis of South Korea, sparked by the influence-peddling scandal of Park and her confidante Choi Soon-sil, should be utilized as a new opportunity to eradicate deep-rooted irregularities.

Ahn also said he will fight against policies based on populism, claiming the people do not want a "free lunch" and that distributing tax revenues does not solve problems.

The governor, meanwhile, is expected to compete with Moon Jae-in, a front-runner candidate from the same party in a primary election. Moon, former head of the Democratic Party, saw his approval rating reach 28.1 percent last week in the survey by RealMeter. Ahn, on the other hand, holds a comparable figure of 4 percent. 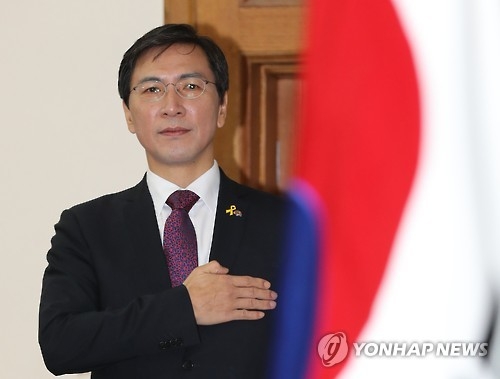