Released on Jan. 4, the hit animated film scored 3.02 million viewers as of 3 p.m. Sunday, according to Media Castle.

It passed Hayao Miyasaki's 2004 work "Howl's Moving Castle" as the most popular animated Japanese movie of all time in South Korea. 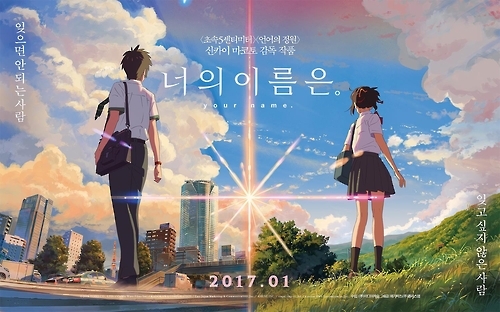 "Your Name." ranked eighth among all animated films that have been shown in the country.

As "Your Name." topped 3 million, Shinkai is expected to visit South Korea again to fulfill his pledge to do so if the movie passes the milestone. He made the pledge when he last visited Seoul early this month for the film's promotional activities.

"We're currently discussing visit schedules with the filmmaker," a Media Castle official said requesting not to be named.

Also on Sunday, the homegrown comedy-action flick "Confidential Assignment" exceeded the 100 million viewers on the fifth day of its run.