"We're meeting with the prime minister of Canada, and we will be meeting with the president of Mexico, who I know, and we're going to start some negotiations having to do with NAFTA," Trump said during a ceremony to swear in senior White House staff, according to pool reports. 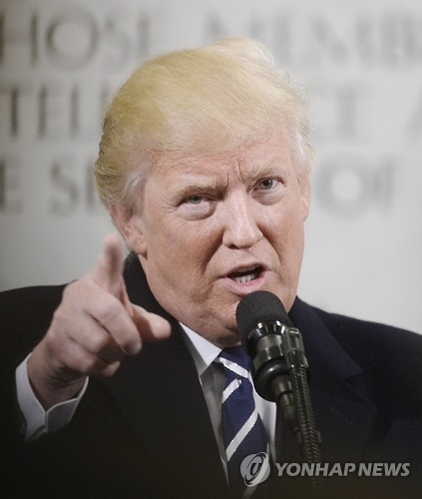 Renegotiating NAFTA was one of Trump's key campaign pledges on economic and trade issues, along with repealing the Trans Pacific Partnership (TPP), a massive free trade agreement signed among 12 Asia-Pacific countries, including the United States and Japan.

Trump has blamed free trade deals as a key cause of American economic problems in an attempt to rally support from voters struggling with economic woes. During the campaign, he also denounced the free trade pact with South Korea as a job-killing deal but has made no mention of it since his election.

On the first day of the new administration, the White House released major policy points of the incoming administration on its website, including carrying out Trump's pledge to withdraw from TPP and renegotiate NAFTA.

The White House also pledged to "crack down on those nations that violate trade agreements and harm American workers in the process."

"The president will direct the Commerce Secretary to identify all trade violations and to use every tool at the federal government's disposal to end these abuses," it said.