On Sunday, the North's leader paid his tribute to Kang Ki-sop, director-general of the General Administration of Civil Aviation and alternate member of the ruling party's central committee, according to the Korean Central News Agency (KCNA). It did not reveal when or why Kang died.

Kim called him a "revolutionary soldier" who fulfilled his duty in a responsible manner, saying that Kang successfully ensured the operation of regular international and domestic air services, the report said.

The visit marked the first time since December 2015 when the North's leader visited a funeral altar of party secretary Kim Yang-gon who died in a traffic accident.

The country's state-owned flag carrier Koryo Air is controlled by the aviation body. The airline is among the North Korean entities blacklisted by South Korea and the United States in December on the suspicion that it helps the regime transfer workers abroad for foreign currency earnings.

Kang was cited as the director-general of the aviation agency in 2005 when the 50th anniversary of its establishment was held, according to the North's media reports.

He was elected as an alternate member of the WPK's central committee at a party congress held in May 2016.

Analysts said that it is rare for the North's leader to attend the funeral of an official who is not viewed as having a high-ranking post.

Last year, Kim only sent a wreath to a state funeral for Kang Sok-ju, a former party secretary in charge of international affairs, who died of esophageal cancer at 77.

Experts said the leader's rare visit may be related to his affection for planes, as he is known to use a private jet or even a small plane unlike his late father Kim Jong-il.

"Kim also appears to show to other military and party officials that he cared for a subordinate who showed strong loyalty," said Kim Yong-hyun, a professor of North Korean studies at Dongguk University. 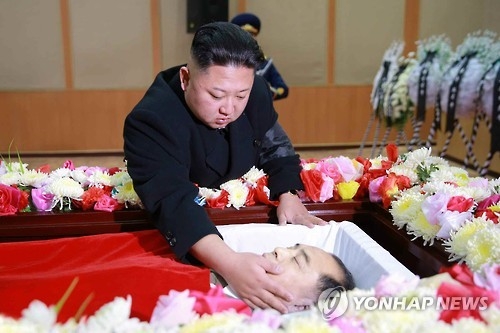