SEOUL, Jan. 23 (Yonhap) -- South Korea's trade has turned upward after a two-year lull, but it is likely to miss the US$1 trillion target again this year and possibly next year as well, the central bank said in its estimate Monday.

The Bank of Korea (BOK) projected a trade volume of $955 billion this year, a 6 percent increase from last year on a customs clearance basis. Exports are expected to rise 4.3 percent to $517 billion and imports 8 percent to $438 billion.

The estimate is an improvement from a 5.9 percent fall in exports and 7.1 percent drop in imports last year, but the $1 trillion target is still beyond reach, according to the central bank.

Outlook for 2018 remains bleak, it said, with trade volume stopping at $983 billion, or $530 billion in exports (2.5 percent increase from 2017) and $453 billion in imports (3.4 percent increase). If the projections turn out to be true, it will be the fourth year in a row that the target is missed. 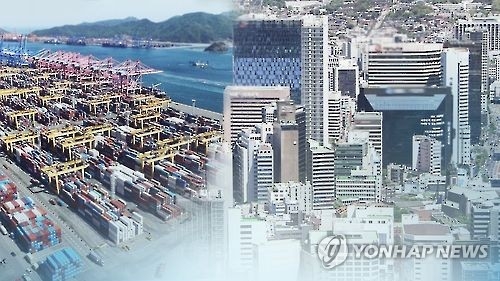 The trade ministry's estimate for this year's trade volume is a bit less than the central bank at $945 billion. It cites strengthened trade protectionism as one of the main risks threatening to undo some improvement in demand for South Korea's main exports, such as semiconductors and displays.

The BOK took a special note of the effect from trade protectionism, which it said cost South Korea $2.4 billion in exports in 2015, or 0.5 percent of the total. In the January-November period last year, the effect accounted for $2.8 billion in lost exports, or 0.6 percent, it said.

Should such trade barriers become stronger, South Korea stands to lose an annual average of 0.8 percent of exports from this year to 2020, the central bank said. A 10 percent increase in trade restrictions would mean a 1 percent drop in South Korea's exports, it said.

"Considering the high economic connections with the United States, the country that accounted for 13.3 percent of South Korea's exports in 2015, our economy will be influenced by Donald Trump administration's policies," the BOK said. "If trade protectionism and renegotiation demands for the bilateral free trade agreement do materialize, there will be a burden on our economy."
(END)