A dozen state-funded financial organizations here plan to increase the number of new employees to around 1,000 in 2017, up 35 percent from last year.

"They need to (further) expand youth employment to set an example," Yim Jong-yong, chairman of the Financial Services Commission (FSC), said in a meeting with the heads of the companies.

The government expects such an initiative to affect the private financial sector preparing to introduce Internet-only banks and promote financial technology, or fintech.

The jobless rate of South Koreans aged between 15 and 29 rose to 9.8 percent last year from 9.2 percent a year earlier, according to Statistics Korea. 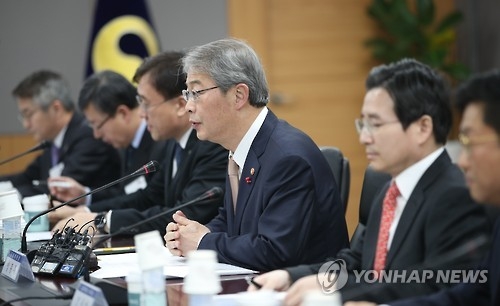 Yim called for a concerted effort to encourage the younger generation to launch tech startups.

The authorities have earmarked 42 trillion won (US$36 billion) this year for the program, up 3 trillion won from 2015.

He emphasized the importance of spreading the performance-linked pay system in the financial industry despite strong opposition from labor unions.

The FSC chief also requested state policy lenders to do their best to help revitalize the real economy.

The commission earlier announced plans to raise the supply of policy financing for the local corporate sector in 2017 to a record high of 187 trillion won, which includes 85 trillion for new-growth industries.

Yim urged the spending of more than 58 percent of the funds in the first half of the year.

"Korea Development Bank and Korea Eximbank need to step up support for new growth industries so that they can cope with the fourth industrial revolution in a preemptive and active way," he said.

He asked the Industrial Bank of Korea to make every effort to support small and medium-sized enterprises.