SEOUL, Jan. 23 (Yonhap) -- South Korea's Acting President and Prime Minister Hwang Kyo-ahn on Monday mounted a strong defense of the plan to deploy a U.S. missile defense system to the Korean Peninsula, saying it is a "necessary self-defense measure incomparable to any other."

His remarks came amid mounting concerns over a series of recent steps China has taken against South Korean businesses, entertainers and other sectors in apparent retaliation for the planned installment of a Terminal High-Altitude Area Defense (THAAD) system on the peninsula.

"I would like to say again that the deployment plan is a definitely necessary self-defense measure that is a step incomparable to any other values," Hwang said during the New Year's meeting with local reporters. 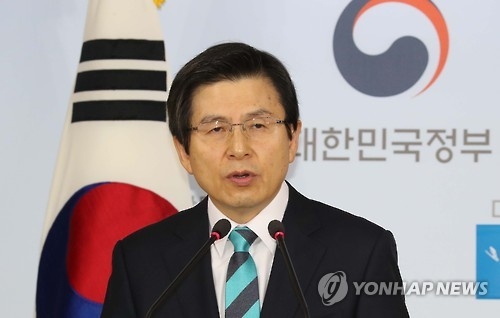 "I think the government has to do everything to protect the nation and citizens' lives, and THAAD is a necessary defense measure (whose deployment) can no longer be deferred," he added, stressing Seoul is in talks with Washington to deploy THAAD to South Korea "as soon as possible."

As for the rationale for the early deployment, Hwang stressed Pyongyang's evolving nuclear and missile threats as being "obvious and real."

"Its nuclear and missile capabilities are developing at an unprecedented rate," he stressed.

Hwang has been serving as the acting president since Dec. 9 after President Park Geun-hye was impeached by parliament over a corruption scandal.

Referring to THAAD's military efficacy, Hwang pointed out experts at home and abroad as well as officials in Seoul and Washington have concluded the stationing will "considerably" bolster defense.

Asked if Hwang plans to run in the country's presidential election later this year, he remained noncommittal -- a subtle shift from his earlier stance that he would not throw his hat into the ring.

"For now, I am not in a situation to think about various other matters," he said. "It is my duty to focus wholly on normalizing difficult state affairs quickly and preparing the nation for the future."

Regarding the diplomatic tension between Seoul and Tokyo over the recently erected statue symbolizing South Korean victims of Japan's wartime sexual slavery, Hwang vowed to strive hard to "overcome" the issue.

"Given that it is basically an issue involving civilians, it is not something the government can meddle in," he said. "But we (with Tokyo) are in consultations through various channels as there is the need to gather our wisdom at the state level over how to deal with it for the future of our bilateral relationship."

Asked about how he will deal with a possible demand from Washington to increase its share of the costs for the upkeep of the 28,500 U.S. troops in South Korea, he said the two sides will have "sufficient consultations."

Hwang, in addition, noted the new U.S administration will sufficiently carry out its review of what President Donald Trump said on his campaign trail last year in its actual policy implementation.

In his opening remarks, Hwang reiterated his vow to push for seamless policy coordination with the U.S. administration on a set of key issues, including the nuclear standoff with the North.

Hwang also reiterated that his government will establish a robust security posture based on its self-defense capabilities and the Seoul-Washington alliance to ward off Pyongyang's possible provocations.

"(The Seoul government) will push in earnest for seamless policy coordination (with Washington) for the development of the South Korea-U.S. alliance, the handling of North Korea's nuclear issue and the development of economic and trade relations," Hwang said.

Over the past month or so, Seoul has been trying to establish ties with the new government in Washington by sending security and diplomatic officials to the U.S. for talks with Trump's high-level aides.

The move came amid concerns about shifts in the bilateral alliance that have been spawned by a series of Trump's election-year remarks. His remarks highlighted general skepticism about America's security alliances with South Korea and other nations, and free trade deals.

Hwang also renewed his pledge to apply "across-the-board" pressure to the recalcitrant regime in Pyongyang to induce its denuclearization.

"(South Korea) will continue to induce North Korea's denuclearization through the framework of across-the-board sanctions on Pyongyang that has been established through cooperation between Seoul and Washington and with the international community," he said.

On the economic front, Hwang said that the government, in tandem with the private sector, will mobilize "all available resources" to help local businesses make inroads into foreign markets so as to have them lead the country's economic recovery.

He also called for national unity in overcoming a series of national challenges and made another proposal to hold a meeting with the leaders of the ruling and opposition parties to strengthen communication with parliament.