(ATTN: UPDATES with launch of frigate for Thai Navy)

As part of the measures, the shipyard plans to cut its workforce by some 2,000 this year to some 8,500 in total by the end of the year, and accelerate its move to spin off its non-core business units such as its IT division.

Meanwhile, the shipyard is aiming to clinch new orders worth $5.5 billion this year. Last year, it aimed to bag $6.2 billion worth of orders, but only secured a meager $1.55 billion worth of shipbuilding deals.

Daewoo Shipbuilding is expected to have seen its operating losses narrow last year on the back of its tough restructuring measures, including job reduction and asset sales.

The country's top three shipyards -- Hyundai Heavy Industries, Samsung Heavy Industries Co. and Daewoo Shipbuilding & Marine Engineering Co. -- suffered a combined operating loss of 8.5 trillion won in 2015. The loss was due largely to increased costs stemming from a delay in the construction of offshore facilities and an industrywide slump, with Daewoo Shipbuilding alone posting a 5.5 trillion won loss.

Separately, Daewoo Shipbuilding launched a 3,650-ton frigate at its shipyard on Geoje Island, close to the southern port city of Busan, for the Royal Thai Navy. Daewoo Shipbuilding said it will carry out trials on the vessel and test it before delivering the warship to Thailand in 2018. 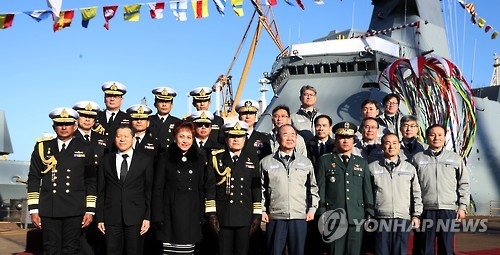