The Doosan Bears in the Korea Baseball Organization (KBO) said they've re-signed right-hander Dustin Nippert for US$2.1 million. The 35-year-old is the first foreign player in the KBO to surpass $2 million in annual salary since the league opened the doors for imports in 1998.

Nippert was an integral part of the Bears' championship-winning team in 2016. He led the KBO with 22 wins and a 2.95 ERA in the regular season, and threw eight shutout innings in Game 1 of the championship Korean Series as the Bears went on to sweep the NC Dinos.

In November, he was voted the regular season MVP, becoming the fourth foreign player to be so honored in the league's 34-year history.

Nippert will be entering his seventh KBO season, making him the longest-tenured foreign player in the Bears' history. 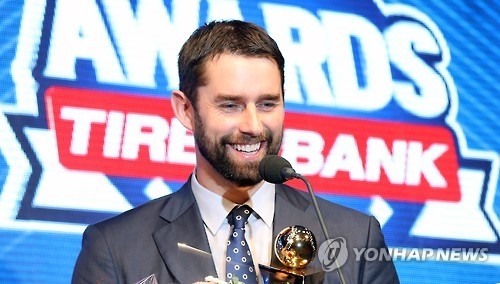 In a phone interview with Yonhap News Agency, Nippert sounded surprised that he'd just signed a record contract for a foreign player in the KBO, responding with "Oh, really?" when told of the tidbit.

With Nippert's signing, the Bears have retained the league's best starting rotation. Nippert and fellow American Michael Bowden teamed up with a pair of South Korean left-handers, Chang Won-jun and Yoo Hee-kwan, to combine for 70 victories. They formed the first rotation in the KBO history with four 15-game winners.

But Nippert, who isn't particularly fond of the moniker "Fantastic 4" for the rotation, insisted he will not dwell on the team's past success.

"Last year is over. I am not going to think about it," he said. "If we go out and try to beat that, then we're not going to be successful. We just need to go out this year and not worry about last year."

Nippert added his goal has never changed from season to season.

"My goal is to have fun, stay healthy and help the team," he said. "I say it every year. I feel like I am a broken record, but it's honestly the same thing. (I want to) enjoy this while it lasts."