SEOUL, Jan. 23 (Yonhap) -- Lotte Mart said Monday it has begun selling U.S. eggs as they finished quarantine and hygiene procedures over the past weekend after being brought in a week earlier.

The eggs are part of 100 tons of eggs flown here from the United States on Jan. 14 on a Korean Air freighter to help ease a supply shortage as more than 30 million chickens have been culled across the country since the outbreak of avian influenza in November.

"We've lowered the price to 8,490 won from the originally set price of 8,990 won as the government raised the air freight charge subsidy on the 16th (of January) to 1.5 million won from 1 million won per ton."

It also removed tariffs on imported fresh eggs and egg products for the coming months as the massive culling of chickens due to avian influenza has pushed up the prices of eggs, bread, snacks and instant noodles made with eggs.

U.S. eggs have also been available at Dream Home Mart outlets in Seoul and Incheon, west of Seoul, since Saturday. 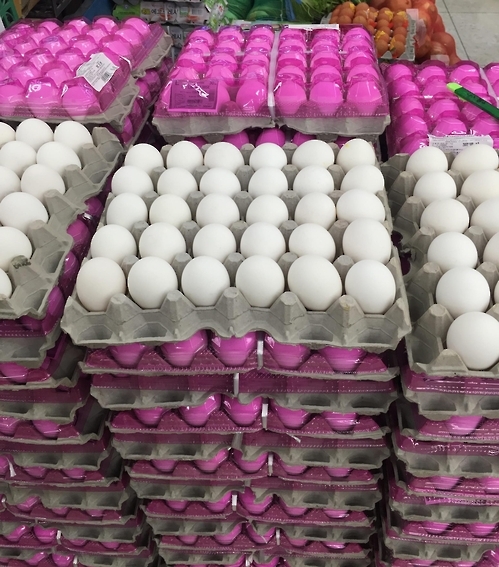 An official at the Dream Home Mart in Gocheok-dong, western Seoul, said scores of 30-egg packages were sold Saturday and Sunday, the same amount as Korean eggs sold.

"U.S. eggs are selling steadily, and we expect the sales to rise gradually," the official said, noting clients are getting curious about U.S. eggs, as it is the first time for any foreign eggs to be imported.

"I bought them because I was wondering how U.S. eggs taste, and they are not expensive," said a 60-year-old woman who identified herself only by her family name Kwon. "I am going to buy three more packages of U.S. eggs for the upcoming Lunar New Year holiday later this week."

U.S. eggs are usually white in color, while Korean eggs are brown, making it easier for buyers to confirm the place of origin.

South Korea's daily egg output had been 42 million eggs on average but fell below the 30 million level since the bird flu outbreak. 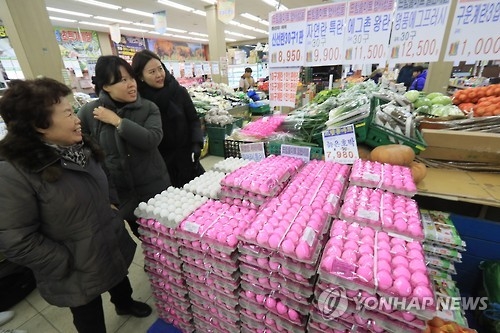 A total of 22 million eggs, including 750,000 imported by the Korea Agro-Fisheries & Food Trade Corp. (aT), will be provided in the market before the Lunar New Year holiday that starts Friday, the government said.

The state-run aT has a plan to purchase a combined 45 million foreign eggs, including the first batch of 750,000 eggs to be imported Tuesday, in the coming weeks as part of the government's efforts to stabilize the price.