SEOUL, Jan. 23 (Yonhap) -- Seongnam Mayor Lee Jae-myung from the main opposition Democratic Party said Monday he will join the upcoming presidential election, proclaiming he will compete with front-runner Moon Jae-in from the same party at the primary race.

During his announcement, Lee said he will devote himself in bringing justice to society, claiming his administration will give no tolerance to President Park Geun-hye and Samsung Group's heir-apparent Lee Jae-yong.

Park was impeached in December on alleged corruption, with an independent counsel currently looking into her supposed wrongdoings as well as the ties with local conglomerates, including Samsung. South Korea will hold the next presidential election earlier in 2017 if Park's ouster is finalized.

Lee said he seeks to dismantle local conglomerates so as to challenge South Korea's big establishments.

"The economy can only revive and grow by expanding welfare through a reasonable tax hike on high-profit companies and individuals," Lee said.

The mayor said he will provide 1 million won (US$857) annually to 28 million South Koreans, including those aged below 30 or above 4, as well as to farmers, fishermen and the handicapped. Lee said he will also install a new tax policy on real estate to provide 300,000 won to all South Koreans.

Lee also continued to express strong opposition to the deployment of an advanced U.S. missile defense system in South Korea.

"With the Korean Peninsula surrounded by strong leaders such as Trump, Xi, Abe and Putin, we need a leader with a clear spirit of determination and independence to protect principle and national interests," Lee said.

According to the data compiled by RealMeter last week, Moon held an approval rating of 29.1 percent. Lee numbers stood at 10.2 percent. 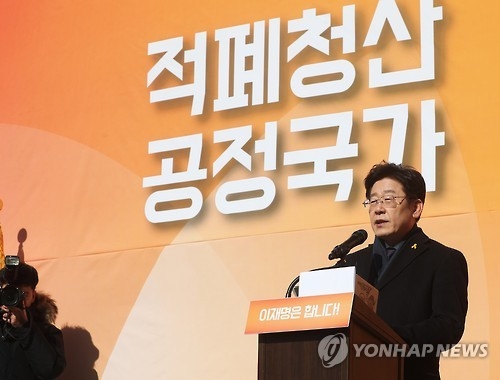