According to the report by the state-run Korea Internet & Security Agency (KISA), a series of so-called distributed denial of service (DDoS) attacks on infrastructure systems through IoT-enabled devices may occur just ahead of a presidential race in the country.

The agency said the DDoS attacks may occur with the aim of stirring political and social instability as South Korea may hold the next presidential election if President Park Geun-hye's impeachment motion is adopted by the Constitutional Court.

The IoT refers to a network of physical objects, including vehicles, buildings and electronic devices, connected to the Internet to exchange data. It allows such objects to be sensed and controlled remotely.

"There is the possibility that huge DDoS attacks could occur by using IoT devices from both home and abroad," said Jeon Kil-soo, a KISA official, noting that presidential candidates could also be the targets of such attacks.

The report also came as North Korea has ratcheted up its cyberwafare against the South. North Korea has been long accused of waging cyberwarfare, including hacking South Korean and even U.S. companies.

The agency said that the country will be also exposed to more ransomware programs as hackers are increasingly breaching Internet-enabled devices.

Ransomware refers to a type of malicious software that bans access to the files saved on a computer or suspends access to the computer entirely until a certain action is performed, with some even demanding payment. 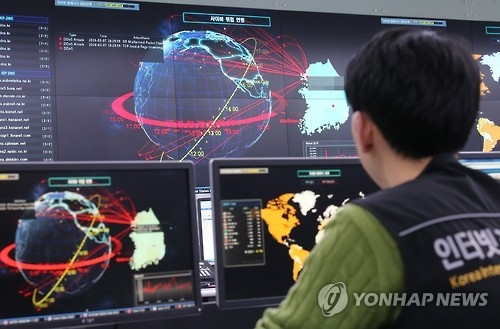 New type of cyberattacks to rise in 2017: report

New type of cyberattacks to rise in 2017: report