SEJONG, Jan. 23 (Yonhap) -- The culture ministry made a public apology and vowed to make efforts to prevent a recurrence of the blacklisting of artists critical of the government that led to the arrest of top policymakers and their deputies.

"We feel terrible and shameful that the Ministry of Culture, Sports and Tourism caused any problems in the fairness of the government's support of the culture-arts scene over the list of artists excluded from public support. (The ministry) is supposed to defend the freedom and creativity of artistic expression," Song Soo-keun, the first vice culture minister who currently acts as minister, said during a news conference.

He read a pre-released statement from senior ministry officials, including himself, during the conference at the ministry office building in Sejong City, south of Seoul. 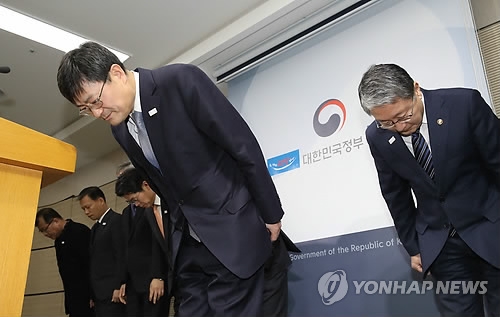 "We should have thoroughly apprehended this problem beforehand, unearthed the truth and worked out preventive measures. But we didn't... There is no excuse," he said.

The ministry vowed to "fully cooperate" with the investigation so the truth can be found and to "take due responsibility" if any.

The apology came two days after its minister Cho Yoon-sun was arrested by special prosecutors along with Kim Ki-choon, an ex-presidential chief of staff, over their suspected roles in the blacklisting. Cho instantly resigned from her post following the arrest.

Prosecutors suspect that President Park Geun-hye sought to make a blacklist of artists critical of the government's much criticized handling of the tragic sinking of the Sewol ferry in 2014, which claimed more than 300 lives.

Cho's predecessor Kim Jong-deok and his deputies Kim Jong and Chung Kwan-joo are also currently under custody by prosecutors over their alleged involvement in the writing and management of the list.

They are being probed as part of a wider political scandal surrounding impeached President Park Geun-hye and her close confidante Choi Soon-sil. Choi is accused of exerting undue influence over state affairs by using her ties with the president for personal gain.

Both Park and Choi have refuted being involved in any wrongdoings.