Marketing activities will be focused on Southeast Asian, European and Middle Eastern nations this year to lower the ratio of Chinese tourists who account for more than half of inbound foreign tourists.

The KTO aims to attract 3.6 million tourists from Southeast Asia, 2.5 million from Europe and North America and 1.1 million from the Middle East this year.

It will also work to woo 8.3 million Chinese tourists this year, up 2.3 percent from last year, by developing premium tour packages worth over 3 million won (US$2,569) and inviting Chinese power bloggers so they can help attract private Chinese tourists rather than those who come in groups.

The KTO has set a target of getting 2.5 million tourists from Japan this year.

It plans to send its officials to schools in Japan to introduce South Korean tourist attractions so Japanese students can take school field trips to South Korea.

Also included in the release is the establishment of KTO branches in Tehran and Almaty and opening of online web sites in Middle Eastern states to promote the tourism industry in South Korea. 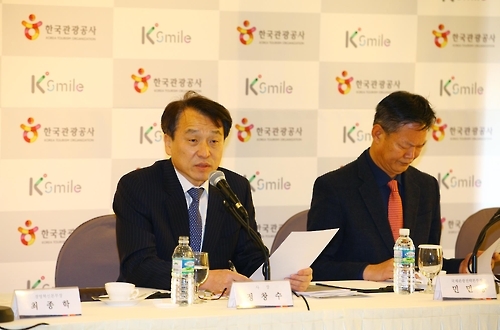