SEOUL, Jan. 23 (Yonhap) -- A former South Korean culture minister said Monday an ex-presidential chief of staff was behind the creation and management of a blacklist of cultural figures deemed critical of the government.

Yoo Jin-ryong, who served as the minister from March 2013 to July 2014, made the remark as he appeared before the office of a special prosecutor's team to undergo questioning over the alleged blacklist to deny dissident artists state support.

"The (creation of the) blacklist was spearheaded by Kim Ki-choon for the government to discriminate and exclude those who do not agree with it (from receiving state sponsorship)," Yoo told reporters before entering the office.

Kim was President Park Geun-hye's top secretary from 2013 to 2015 and is known to have exerted significant influence on state affairs.

"I believe that the fact that (the presidential office) systematically suppressed the artists using the national budget is an unforgivable violation of the constitutional values," Yoo said.

The probe team on Saturday formally arrested Culture Minister Cho Yoon-sun and Kim on charges of abuse of authority. Cho, the first incumbent minister to be arrested in the country's history, resigned shortly after being detained.

Cho's predecessor Kim Jong-deok and his deputies Kim Jong and Chung Kwan-joo are also currently in custody for questioning over their alleged involvement in the blacklist.

Investigators are now looking into whether President Park was behind the creation and management of the list. Park has flatly denied the allegations.

The Ministry of Culture, Sports and Tourism on Monday made a public apology over the scandal, vowing to "fully cooperate" with the investigation. 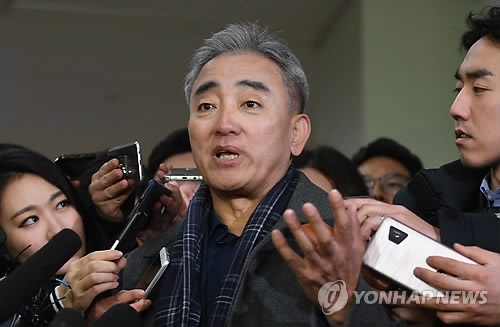 Hong Wan-sun, a former head of the asset management division of the National Pension Service, and Chu Jin-hyung, ex-chief of Hanwha Investment & Securities Co., were questioned on Monday by investigators over suspicions Samsung bribed Choi in return for the state-run pension fund's backing of a merger between two group affiliates in 2015.

During a parliamentary hearing last month, Chu claimed that he was unfairly removed from his post for voicing opposition against the merger.

Lee Kyu-chul, the investigation team's spokesman, said they have not yet decided whether to seek the writ again. He said the investigation into other business groups who gave contributions to two controversial foundations allegedly controlled by Choi will begin after they are done with the probe into the country's largest conglomerate.