SEOUL, Jan. 23 (Yonhap) -- A high-stakes survival game appears to be unfolding between the United States and North Korea, as Washington pushes to bolster its missile defense capabilities in the face of Pyongyang's growing longer-range missile and nuclear threats.

The new U.S. government has unveiled its plan to develop an advanced missile defense (MD) system to counter North Korean threats while the North has signaled it is close to acquiring the technology for an intercontinental ballistic missile (ICBM) that could reach the U.S. mainland.

In a statement issued after his swearing-in on Friday, President Donald Trump said the U.S. will develop a "state-of-the-art" MD system to tackle potential missile attacks from countries like North Korea and Iran.

"President Trump will end the defense sequester and submit a new budget to Congress outlining a plan to rebuild our military," the statement said, referring to the automatic cuts in defense spending undertaken by the previous administration.

The move comes as the U.S. and South Korea picked up signs early this month that North had placed two ICBMs on mobile launchers for possible test-firing in the near future.

The North appears to have intentionally leaked the new missiles to send a "strategic message" to the Trump government. It is likely to fire off a new ballistic missile that flies some 2,500 kilometers and claim that it has succeeded in launching an ICBM, military officials here said. An ICBM has a range exceeding 5,500 kilometers. 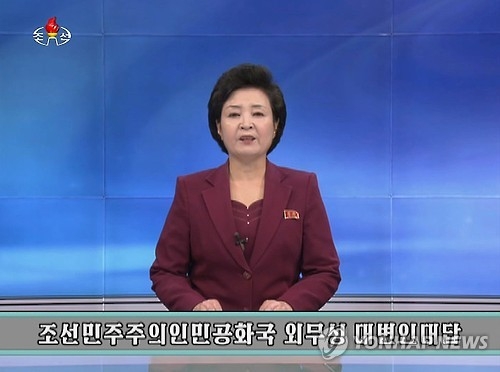 On Jan. 8, North Korea's foreign ministry said that the communist state can test an ICBM at any place and time decided by its leader Kim Jong-un. The ministry's statement came a week after Kim said in his annual New Year's address that the country had reached the "final stages" of ICBM development.

A new ICBM may be powered by a new engine whose ground test was successfully conducted in April last year, experts said.

Its escalated saber-rattling prompted Seoul and Washington to agree on the deployment of the THAAD missile defense system in South Korea by 2017. China has opposed the THAAD deployment here, citing the system could hurt its strategic security interests despite Washington's repeated argument that it is purely defensive and aimed only at deterring North Korean threats.

Some experts interpreted the planned THAAD deployment here as a sign that South Korea will be integrated into the U.S.-led MD system in which the U.S. and Japan have integrated their warning sensors and tracking radar for enhanced real-time mutual missile defense security.

However, South Korea refused to join the MD system. Instead, it has been developing its own missile defense system.

The MD system is a sensitive issue because it can alienate neighboring countries, such as China and Russia, with which South Korea wants to maintain good relations. China, in particular, is Seoul's largest trading partner and a key player in Seoul's drive to get North Korea to give up its nuclear ambitions.