During an interview with Yonhap News Agency, Ban showed his apparent inclination towards the so-called "third political zone," an envisioned group of politicians that are not ensconced in the political mainstream, but can placate widespread anti-establishment sentiment here.

"The idea of the third political zone is a call to join forces with people excluding those prevailing at the two extremes of the political spectrum that are caught in ideological (disputes) with no interest in (the well-being of) the nation and people," Ban said in the first media interview since his return to Korea earlier this month after 10 years of service as the U.N secretary-general. 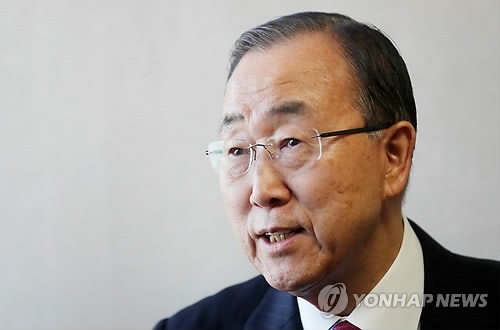 "I will meet all the people who agree to this (idea), with an open mind."

The third political zone often refers to politicians with no ties to President Park Geun-hye and Moon Jae-in, a former leader of the main opposition Democratic Party, who have forged powerful factions in the ruling and opposition camps, respectively, at the expense of intraparty unity.

Ban, with no political affiliation yet, has been long expected to join such a fresh grouping, rather than entering established parties, like the scandal-hit president's Saenuri Party and Moon's Democratic Party, or creating his own party.

The former foreign minister has yet to officially announce his bid for the country's top elected office. But he has repeatedly signaled his presidential ambition, vowing to use his experience at the world body to help advance his home country.

Referring to the grouping of non-mainstreamers, Ban stressed the need for "reform-minded conserves and rational liberals" to join hands to salvage the country reeling from a series of security, economic and political challenges.

"It would not be right in the end to engage in politics of hegemony or clique-led politics," he said. "I will work with whoever shares my thoughts, political vision, and platform and policies that will take shape (in the near future)."

During the interview, Ban also proposed the idea of holding presidential and parliamentary elections simultaneously through a constitutional revision, as part of efforts to prevent national division that could arise through election campaigns.

"You know how much people get enthusiastic and, at the same time, divided during a presidential election," he said. "Two years later when such emotions have not fully died down, we find ourselves getting divided again through the process of parliamentary elections."

Ban also renewed his support for rewriting the Constitution to enact a "power-sharing" presidential system that lessens powers unduly concentrated on a single powerful national leader.

"(A constitutional revision) is necessary for a change in politics," he said. "A power-sharing presidential model based on checks and balances is the most desirable one."

Ban also commented on the escalating diplomatic spat between Seoul and Tokyo over a Seoul statue symbolizing South Korean victims of Japan's wartime sexual slavery. He stressed if the removal of the statue is a condition for Japan's payment of 1 billion yen (US$8.8 million) under a 2015 deal to compensate the victims, he cannot accept the deal.

"What is the most important is to help the victims address their resentments before they pass away," he said, noting that the Seoul-Tokyo deal is not the end of the issue involving the victims forced to serve at Japan's military brothels during World War II.

Ban then expressed his opposition to the idea of the government dictating the way history textbooks are written and taught.

"To improve the freedom of thought and creativity, there must be textbooks entailing various perspectives," he said.

He, in addition, expressed his regret over a set of politicians pledging to shorten the mandatory military conscription term for South Korean men as their campaign pledges, saying they intend to "only calculate votes." 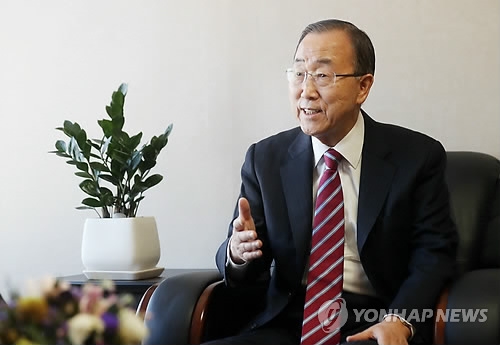 Separately, Ban said he is sorry for the indictment of his younger brother in New York.

"Regardless of the reasons, it is due to my lack of virtue," Ban said on a program aired by public broadcaster KBS.

In South Korea, an older brother or father takes moral responsibility for a crime committed by a family member, even if he had nothing to do with the crime itself.

Ban said what matters is that everything will clearly be brought into the open through legal procedures.

Ban's brother and his nephew Ban Joo-hyun are accused of attempting to hand over some US$500,000 to an unidentified official from the Middle East in the course of trying to sell a building owned by a South Korean construction firm, Keangnam Enterprises, in Vietnam. The money, however, is known to have been spent by a middleman named Malcolm Harris before reaching the official.
(END)