(ATTN: UPDATES with testimony of another Choi associate, background in paras 5, 11-15; ADDS photo)

SEOUL, Jan. 23 (Yonhap) -- President Park Geun-hye cited her friend's daughter as an example of a young and gifted athlete as she ordered the establishment of programs to train emerging sportspeople, a former vice minister said Monday.

The remark by Kim Chong, vice culture and sports minister from 2013-2016, implicates Park further in allegations that she abused her power to give undue favors to her friend Choi Soon-sil. Choi's daughter Chung Yoo-ra was a member of the national equestrian team. 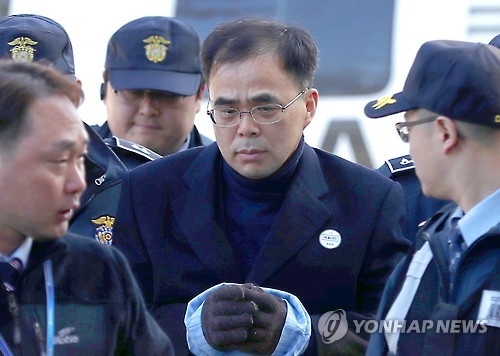 "I was shocked at (Park's) direct mention of Chung," Kim said while testifying at the eighth hearing of the president's impeachment trial at the Constitutional Court. "I recall that (Park) ordered the establishment of programs for talented, able and gifted athletes like Chung."

The former vice minister is a key figure in the influence-peddling scandal centered on Choi and her associates. He is suspected of colluding with Choi to extort money from conglomerates in the name of donations to sports foundations under Choi's control.

Park was impeached by parliament last month over her alleged involvement in Choi's suspected crimes. The court has until early June to decide whether to reinstate her or remove her from office.

Since her impeachment, Park has also been accused of ordering the creation of a blacklist of cultural figures who were critical of the government to exempt them from state support.

The impeached president has refuted all such claims and countered that the prosecution is politically biased.

On Saturday, a special prosecutor arrested Park's former Chief of Staff Kim Ki-choon and Culture Minister Cho Yoon-sun on suspicion of masterminding the formation of the list.

Former Vice Minister Kim testified that he received direct orders from Kim Ki-choon to root out corruption in the sports industry and give regular briefings on the sector.

However, he denied reports that he gave the then chief of staff a list of senior government officials who were against the blacklist.

Cha Eun-taek, a TV commercial director also known as a close associate of Choi, offered his own testimony on Park's alleged discrimination against liberal figures.

Speaking as a witness before the court, he said a number of cultural figures he recommended for high-level positions were dropped for their "left-leaning" views. He added that he heard the reason for their rejection from Choi.

Cha also said he got the impression that Choi and Park spoke regularly on the phone. The director visited Choi's office every two to three weeks for meetings, and every time, she either told the people at the meeting to leave the room or left the room herself to answer a call that always came to a certain one of her four mobile phones.

Choi earlier said she never contacted the president directly, but only through her aides.

Cha also testified to seeing Choi working on documents for Cabinet meetings on her computer. Choi is suspected of receiving various official documents, including confidential ones, and making amendments to them. 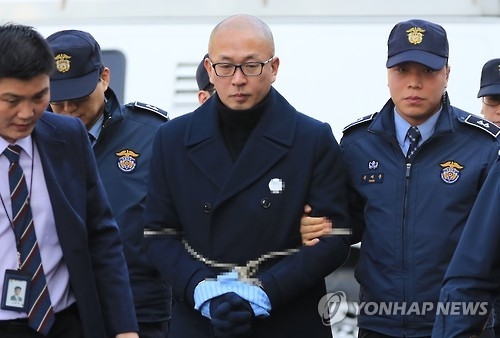