"In order to distinguish ourselves in the fiercely competitive market, we went a different direction from the other K-pop girl groups and utilized a creepy theme, where each one of us represents a different nightmare," the members said during the interview. In the horror-inspired music video of the lead song "Chase Me," the newest rookie band members appear in all-black attire at an eerie hotel with dark, moody lighting, posing a sharp contrast to the happy and light-hearted debuts girl groups usually do.

The story unravels at a haunted hotel where a man comes to spend the night. As soon as the man falls asleep, the evil forces living in the hotel, played by the seven-member act, take turns playing with the man's mind, making him dream seven different nightmares. The girls delight in seeing the man suffer, but soon find out that the man is actually a spirit hunter who is trying to get rid of them.

In addition to the unusual concept and story of the video, the music itself has also garnered much attention due to its fast tempo and hard rock instrumentals backing the song, evaluated as an interesting contrast in light of the visuals.

The group's completely different image turned out to be a phenomenal success with the music video of the lead song hitting 700,000 views on YouTube four days after it was released on Jan. 13.

Dreamcatcher is comprised of members JiU, SuA, Siyeon, Yoohyeon, Dami, Handong and Gahyeon. The group, originally formed under the name Minx in 2014, announced last year that it would re-debut with two new members under the name Dreamcatcher to better match with its new concept. 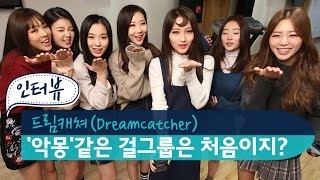