Among the top 20 reality shows which went on air in China last year, seven programs turned out to be remakes of Korean shows. They are ranked in order of viewership rates at their peak during the run of each program.

"Hurry Up, Brother," the Chinese version of Korea's popular reality show "Running Man," has snatched the number one and two spots on the list.

The 11th episode of "Hurry Up, Brother Season 3," which aired on Jan. 8, recorded 4.701 percent in viewership to top the list, while the fifth episode of Season 4 that was broadcast on May 27 recorded 3.934 percent to come right after. 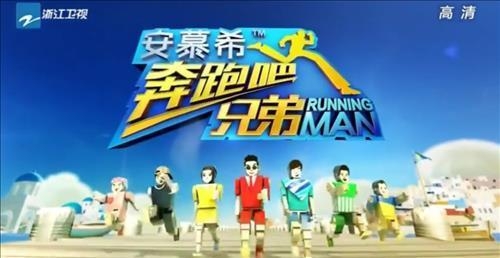 The KOCCA office in Beijing said a variety show with over one percent viewership is considered very popular since there are more than 2,000 programs to compete with.

Since late last year, Beijing has retaliated against Seoul's decision to set up an American anti-missile system on the Korean peninsula by putting restraints on the Chinese consumption of Korean cultural products.

The viewership result, however, shows that the effect of Beijing's efforts to rein in the popularity of Korean entertainment shows might be minimal.