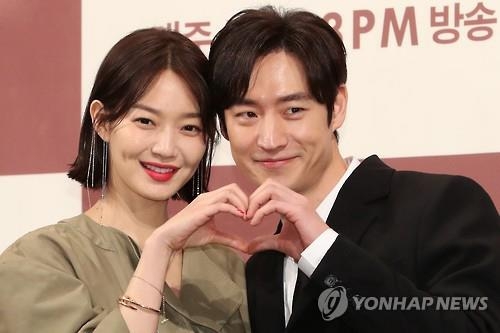 SEOUL, Jan. 23 (Yonhap) -- All marriages, despite the health and intimacy of the relationship, have their share of secrets. But what if the basic foundation -- love and trust -- is the issue at stake?

tvN's upcoming time travel romantic comedy "Tomorrow With You" revolves around a newlywed couple with a big secret. The husband is a time traveler and he approached his wife for reasons other than romance. The wife is unaware of all this.

"(The show) has unusual characters. I thought if we treated the story lightly people would not be able to relate to it so we focused on how to add a sense of realistic weight (marital suspicion) to it," Yoo Je-won, the show's director, told reporters at a media event on Monday in southern Seoul.

A followup to tvN's hit drama "Guardian: The Lonely and Great God," the show features Lee Je-hoon and Shin Min-a as a newlywed couple.

Lee is cast as Yoo So-joon, a successful 30-year-old CEO of a a real estate investment company that hits it big with his ability to foresee the future through time travel. He travels through time on the subway via a mysterious portal located between the Seoul and Namyeong subway stations.

Shin plays Song Ma-rin, a single 31-year-old languishing photographer for an obscure online clothing store. Once a star child actress at five, she became the family's breadwinner at an early age but failed to bloom into an adult actress due to her weak acting.

The show starts with So-joon, the perfect bachelor, out of the sudden romantically approaching Ma-rin. The two have no previous acquaintance.

In a highlight sizzle reel, So-joon witnesses an accident in which Ma-rin seems to have died. Their fates appear to be somehow connected and perhaps So-joon finds this out as he becomes desperate in pursuing Ma-rin, not out of romance but most likely to save himself.

Ma-rin, unaware of So-joon's ability, is dumbfounded by his persistence. But with a career going nowhere and no other man in her sight, So-joon is too big a catch to just throw away.

The two end up getting married but Ma-rin's suspicions surrounding So-joon and his mysterious disappearances keep getting bigger. At the same time So-joon's feelings towards Ma-rin grow more and more genuine.

The show also features Kang Ki-doong as So-joon's best friend and a manager at his company, Cho Han-cheol as Doo-shik, a fellow time traveler, and Kim Ye-won as Lee Keun-sook, Mar-rin's "frenemy" since high school. 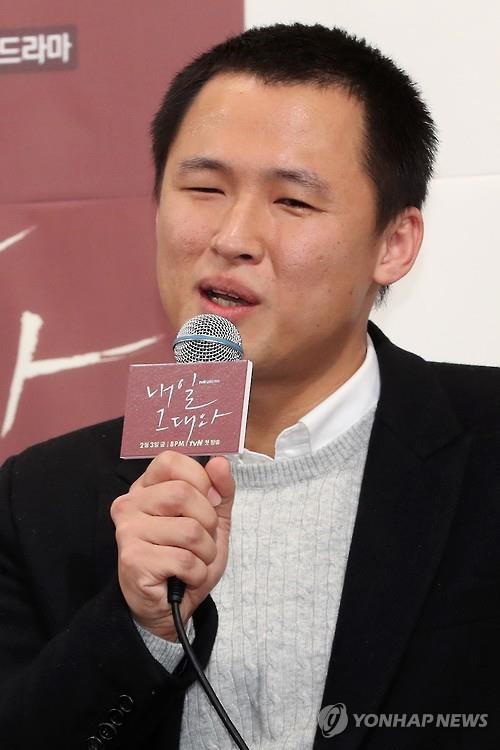 "Tomorrow With You" marks Shin's return to the romantic comedy genre since "Oh My Venus" on KBS 2TV last year. But she said its her first time playing a "normal" or relatable character.

"In previous roles I was either obese, a ghost or a Kumiho (a legendary fox with nine tails) with various setups, but Ma-rin is a woman that could exist in real life," Shin said.

Lee Je-hoon has dealt with time travel material before, through tvN's critically acclaimed show "Signal," but this show is his first acting attempt at the romantic comedy genre.

"I had a sharp public image through heavy, strong and hard stories, but I also want to approach viewers comfortably and closely through a love story," Lee said, adding he was drawn by the show's plot and Shin being cast as his opposite.

For the showrunners, however, the elephant in the room is "Guardian," obviously a tough act to follow.

"I'm breaking out in a cold sweat" joked Director Yoo after being asked about the pressure from immediately following "Guardian," but explained he remains rather calm.

"Someone has to do a drama after 'Guardian." There is pressure but I'm taking it in calmly," said Yoo, who's previous works include "Oh My Ghostess" and "King of High School Life Conduct."

"It's a relaxing and warm romance story but there are also elements of thriller and other genres while exploring the relationship of the two main characters," explained Yoo.

"Tomorrow With You" is set to premiere on Feb. 3.

Romantic comedy 'Tomorrow With You' deals with hidden marital suspicions

Romantic comedy 'Tomorrow With You' deals with hidden marital suspicions