SEOUL, Jan. 23 (Yonhap) -- President Park Geun-hye on Monday paid her respects at the graves of her parents at a Seoul cemetery, her first trip outside the presidential office Cheong Wa Dae since she was impeached over a corruption scandal last month.

Accompanied by her aides and security staff, she traveled to the Seoul National Cemetery in southern Seoul where her parents -- former President Park Chung-hee and first lady Yook Young-soo -- are buried.

"(The president) usually visits her parents' graves ahead of the holiday," Park's aide told reporters, declining to be named.

The four-day Lunar New Year holiday, one of the country's largest traditional holidays, begins on Friday.

Her father ran the country for some 18 years after taking power in a military coup in 1961, He was assassinated in 1979 by his own intelligence chief. Park's mother was shot to death by a North Korean sympathizer in 1974.

Park was suspended from carrying out her duties on Dec. 9, just four hours after the National Assembly impeached her. Prime Minister Hwang Kyo-ahn has since been serving as the acting president.

She now faces an independent counsel probe as well as an impeachment trial at the Constitutional Court over a string of corruption allegations.

She has denied all allegations, vowing to establish her innocence through ongoing legal procedures. 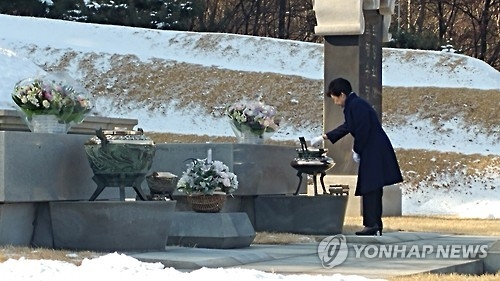