WASHINGTON, Jan. 23 (Yonhap) -- U.S. President Donald Trump on Monday signed an executive order withdrawing the U.S. from a massive Asia-Pacific free trade deal in a move that makes good on his campaign promise and underscores his protectionist stance on trade.

On Monday, Trump signed the measure on TPP, saying, "We've been talking about this for some time."

After the signing, he said it's a "great thing for the American worker" and showed the signed order to the press at the Oval Office, as Vice President Mike Pence, White House chief of staff Reince Priebus and other senior staff looked on.

The White House said the withdrawal "ushers in a new era of U.S. trade policy in which the Trump administration will pursue bilateral free trade opportunities with allies around the world, wherever possible, to promote American industry, protect American workers, and raise American wages."

"It is the policy of the Trump administration to represent the American people and their financial well-being in all negotiations, particularly the American worker, and to create fair and economically beneficial trade deals that serve their interests," it said. 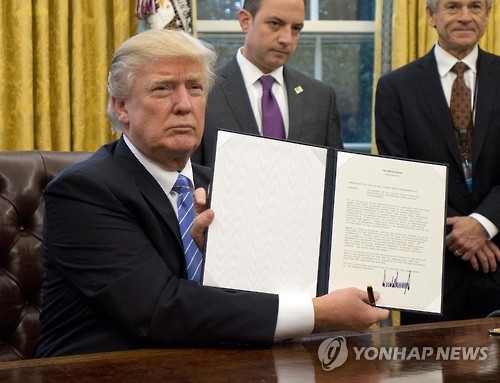 The TPP, which was concluded in October 2015 but has not won congressional ratification, would have created the largest trading bloc in the world, accounting for about 40 percent of global gross domestic product. The deal has been touted as a key symbol of former President Barack Obama's "pivot" to Asia policy.

Sen. John McCain (R-AZ) criticized the withdrawal as a "serious mistake that will have lasting consequences for America's economy and our strategic position in the Asia-Pacific region."

"This decision will forfeit the opportunity to promote American exports, reduce trade barriers, open new markets, and protect American invention and innovation. It will create an opening for China to rewrite the economic rules of the road at the expense of American workers," McCain said.

"It will send a troubling signal of American disengagement in the Asia-Pacific region at a time we can least afford it. Abandoning TPP is the wrong decision. Moving forward, it is imperative that America advances a positive trade agenda in the Asia-Pacific that will keep American workers and companies competitive in one of the most economically vibrant and fastest-growing regions in the world," he said.