SEOUL, Jan. 24 (Yonhap) -- LG Display Co., a flat panel maker, said Tuesday that it swung to the black in the fourth quarter from a year earlier, largely thanks to a rise in panel prices and a diversified product portfolio.

Its net profit reached 825 billion won (US$706 million) in the October-December period, compared with a loss of 13.5 billion won a year earlier, it said in a regulatory filing.

Operating income shot up to 904 billion won in the fourth quarter from 60.6 billion won a year earlier, and sales increased 5.9 percent on-year to 7.94 trillion won, it said. 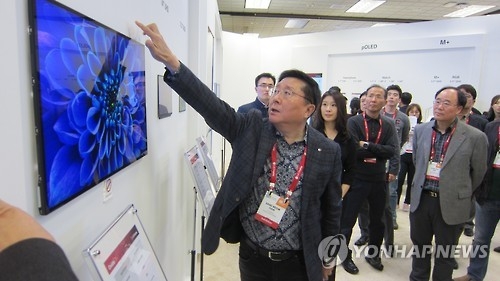 "Sales increased during the latter part of last year and a diversified portfolio helped improve profitability," a company official said.

LG Display expects a rise in panel prices may continue for a while and strives to expand its premium product lineup to better compete with rivals, it said.

LG Display, the world's largest maker of liquid crystal display (LCD) panels, has maintained its No. 1 spot in shipments of large-sized LCD panels for 28 consecutive quarters through the fourth quarter of last year.

LG Display, which has been the world's top maker of LCD TV panels since the fourth quarter of 2009, is expected to remain in the top spot this year with a target of over 51 million unit shipments, market tracker IHS Markit said earlier.

LG Display said it will spend some 5 trillion won this year on upgrading facility and research and development, which will help its output capacity by a large margin.

LG Display, a supplier of screens for Apple Inc.'s iPhones and LG Electronics Inc's TV sets, said earlier that it has been in talks with Samsung Electronics Co. to supply panels.