SEOUL, Jan. 24 (Yonhap) -- Tight family budgets and the anti-corruption law seem to be dampening the Lunar New Year holiday, hitting retailers who are seeing record poor gift sales during what used to be a peak season, industry officials said Tuesday.

The Lunar New Year, one of the most celebrated holidays in the country with millions of people going to their hometowns with gifts for family and kin, begins Friday and ends Monday. Department stores and giant discount chains market specially packaged gift sets for the holiday, with the former selling more expensive types.

The exchange of gifts with people outside of the family, however, has been limited in value by a new anti-corruption law that went into effect in September last year.

"Lunar New Year holiday gift sales may have fallen in the late 1990s following the Asiawide foreign exchange crisis, but I believe this is the first time since then that sales have receded," a mid-level official at Lotte said.

"There are still a couple of days left, so there is a possibility that the final sales will at least meet last year's figures or even increase about 0.5 percent," he said.

A Hyundai official said it was the first sales drop in Lunar New Year presents since the department store started keeping track of them in 2000.

Shinsegae Department Store was the only gainer so far, reporting a 2.2 percent sales increase in the Dec. 15-Jan. 22 period from the same number of days last year. 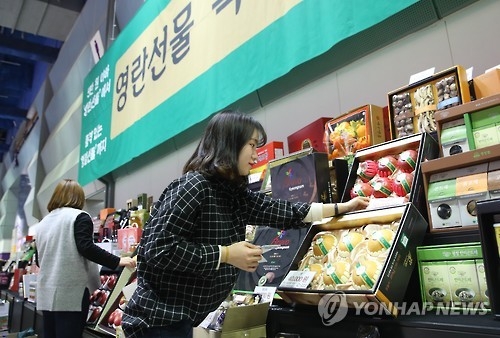 Large discount chains, favored by people looking for more economical gifts, also said their sales fell. At Shinsegae-affiliated E-Mart, sales on Jan. 21, when gift sets were put on display, and the 45 days prior were 3.2 percent lower than the 45 days preceding the period. Lotte Mart said its gift sales from Dec. 5-Jan. 21 marked a 1.2 percent fall from the same period the year before.

Sales records showed a direct impact from the anti-corruption law, which caps the value of allowed gifts at 50,000 won (US$42.85) for people outside the family. The intent of the law is to root out bribery.

Lotte said while holiday gifts overall were visibly less popular, sales of gifts priced under 50,000 won jumped 53.4 percent. Such items included a set of socks that cost between 10,000 won and 30,000 won, whose sales doubled this year ahead of the holiday from last year.
(END)